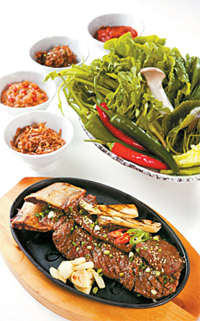 During June:The Ninth Gate Grill, an international style brasserie, offers a Jeju black beef promotion. Native to Jeju Island and having been traditionally regarded as a rare ingredient, the black cattle have 10 percent less saturated fat and more unsaturated fats, such as linoleic acid and oleic acid, compared to other local beef.
Exclusive of tax and service charge, the lunch set is 98,000 won and the dinner 150,000 won. Reservations required. The Westin Chosun Seoul 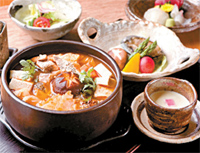 Ongoing: A special summer menu - “Drum fish nabe Teishoku” and “Steamed Abalone with Rice Wine and Drum Fish Nabe Teishoku”- is offered in the Japanese restaurant Shunmi. Since 2010, by Zagat has selected Shunmi as one of Seoul’s best restaurants.

Only the first 10 guests will be eligible for the special menu on a daily basis and all prices are subject to a 10 percent VAT. 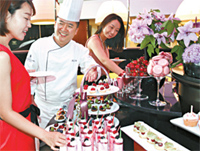 Through July: The hotel presents the “World of Cherry and Berry Promotion” from 12:30p.m. to 3:30 p.m. Friday through Sunday at the Lobby Lounge.

The promotion offers a tasting of a new dessert menu centered on the summer’s cherries and berries in a buffet-style setting prepared by InterContinental chefs from 13 countries.

The dessert delicacies include a raspberry mille-feuille sweet pie from England, sweet cherry creme brulee from France, a cherry Kirsch Cake from Germany, a raspberry shortcake from the United States, a berry zabaglione from Italy, a berry baklava from Turkey, a berry cream caramel from Mexico and more will be available during the promotion. Mulberry punch, berry cocktails and juice smoothies are served along with this list of a variety of desserts.