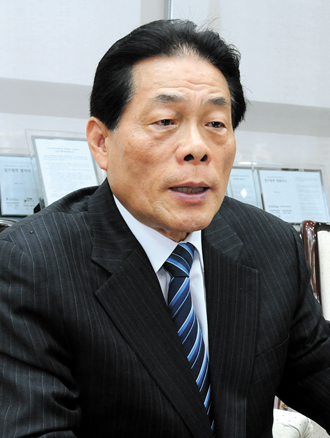 While there are mounting concerns that Korea will face a nationwide blackout this summer due to a drop in power supply with three reactors undergoing maintenance, Chun Byung-tae, chair of the Korea Nuclear Energy Promotion Agency, said, “The only way to avoid a sudden power loss is to have all Koreans participate in energy-conserving measures.”

“There is no way in which we can increase the power supply in a short time, so Koreans should actively participate in a nationwide energy-saving campaign to avoid a blackout,” Chun said. “Voluntary participation could include maintaining indoor temperature above 26 degrees Celsius (79 Fahrenheit) and turning off air conditioners during the peak time between two and five.”
Chun’s comments come after Korea’s electricity reserve rate dipped to as low as 4.9 percent of total supply capabilities last Thursday due to the unusually high temperature. Anything below 7 percent is considered an unsafe margin. Usually, energy use peaks in January and August.
Also, three large reactors — Gori-1, Uljin-4, and Shin Wolseong-1 — are currently undergoing regular check-ups that require they be shut down for about a month.

Another factor is the questions and doubts about the safety of nuclear power in the wake of the Fukushima Daiichi disaster more than a year ago. That led the Japanese government to temporarily suspend operations of all of the country’s 54 nuclear power plants last month. Other countries are also rethinking their energy policies.
“We should think more about the nationwide blackout that happened in September last year than the Fukushima nuclear accident,” Chun said. “If we don’t manage power supply and demand properly and we face another blackout, it could be a big disaster.”

Q. Nevertheless, voices have been raised by environmental civic groups that the Korean government should reduce its dependency on nuclear energy, like Germany and Japan are doing. What is your opinion on this?

A. It’s not right to simply compare Korea’s energy policies with other countries like Germany and Japan. Over the past 10 years, energy companies in Germany have suffered from massive economic losses and their competitiveness in the global market has deteriorated because their government has changed its energy policies three times. Germany is currently importing electricity from France’s nuclear reactors — which I think is ironic. The fundamental aim of the country’s energy policy is to ensure a stable supply of electricity. Following the paths of other countries could bring Korea big economic loss. As of right now, there are no alternatives to nuclear energy for Korea.

Is Korea the only country sticking to nuclear power operation after the Fukushima incident?

What about a shift to renewable energy, like solar and wind?

I really hope the day will come in the near future when we’re able to use solar energy. If that becomes possible, we would no longer have to use nuclear energy as a power source and operations would naturally close.
But in reality, it is difficult to use renewable energy as a substitute for nuclear power; we do not have enough technology or money. So until that day comes when renewable energy replaces nuclear power, the two sources of power should coexist. People should consider nuclear power as an energy source that lays a bridge to the age of renewable energy. Using oil and coal to produce energy would be too expensive, as we would have to import them. And a study showed that replacing nuclear power with thermal power generation would cost an additional 15 trillion won ($12.8 billion); that is about 860,000 won more per year for each family in Korea.

Recently, the Korea Federation for Environment Movement carried out a simulation indicating what it would be like if the Gori Nuclear Power Plant had an accident similar to the ones that happened at Fukushima and Chernobyl. The federation said at least 850,000 would die of cancer and estimated the economic loss at 628 trillion won. How safe are our reactors?

The experiment by the KFEM was based on an unrealistic assumption and scenario. The virtual experiment presumed that the amount of radiation leaking from the Gori plant would be the same as the amounts leaked from the Fukushima and Chernobyl plants. But the basic structure of our power plants is different. I would say the experiment hurt the reputation of the country’s largest environmental group. It’s a pity that it led people to worry more about nuclear power.

On a separate note, there are criticisms regarding recent corruption scandals involving senior officials in the nuclear component supply business. Also, public officials tried to conceal an accidental shutdown of the Gori-1 reactor for more than a month. Koreans seem to have lost trust in the nuclear power industry. Do you have any comments on that?

It is true people have lost trust due to a series of scandals and incidents. But I think the incidents were like warning shots to avoid even bigger problems in the future. I must say that it is impossible to use nuclear energy as a useful resource without sufficient understanding by the people. The level of ethical standards of those working in the nuclear reactor sector should be raised and hopefully we will be able to see improvements.