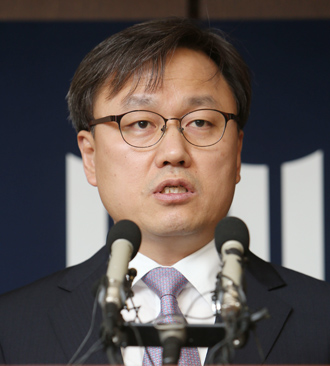 After a three-month reinvestigation of the government’s illegal surveillance of rivals and critics of the Lee Myung-bak administration, the prosecution yesterday filed indictments against a key associate of President Lee and a former Blue House official.

The special investigation team of the Seoul Central District Prosecutors’ Office said Park Young-joon, former vice minister of knowledge economy, was indicted on charges of ordering the public ethics office of the Prime Minister’s Office to conduct the spying operations in 2008.

Lee In-gyu, a former public ethics official of the Blue House, was also indicted for doing the illegal spying on the orders of Park. Park was arrested in May on charges of taking about 100 million won ($85,800) in bribes to influence the awarding of a construction project five years ago.

The prosecution revealed that the spying was widespread on prominent members of the society, including politicians, judges and businessmen. About 500 cases were detected, the prosecution said, but it filed criminal indictments in only three cases, saying the rest were routine information gathering.

The prosecutors failed to get enough proof of the allegation that the Office of the Senior Secretary to the President for Civil Affairs systematically destroyed evidence of the spying. The prosecutors also failed to reveal the source of 50 million won allegedly paid to one of the conspirators to buy his silence.

The scandal first began in September 2008 when the public ethics officials of the Prime Minister’s Office investigated a businessman who made a posting critical of President Lee on his personal blog. In June 2010, the opposition Democratic Party, the predecessor of the Democratic United Party, claimed the Lee government was illegally spying on ordinary Koreans. The public ethics office was supposed to investigate illegal behavior of civil servants and public officials.

The prosecution launched an investigation in July 2010 and wrapped up the probe the next month. Lee In-gyu, a senior ethics official of the Prime Minister’s Office, was indicted on charges of abuse of power, and other officials, including Jin Gyeng-rak and Jang Jin-su, were indicted on charges of evidence destruction. The three were convicted of the charges in November.

The scandal was revived earlier this year when Jang turned whistleblower and said the Blue House ordered “special management” of the evidence, or its destruction, after the matter was reported to the president. Jang also said he was provided with 50 million won in return for his silence.

On March 16, the Seoul Central District Prosecutors’ Office launched a reinvestigation into the scandal and the outcome was announced yesterday.
The prosecutors said Park had abused his power by ordering illegal surveillance after receiving 100 million won in 2008 from a company in South Gyeongsang that wanted to invest in an industrial complex in Ulsan. The company paid Park to gather information on a rival and the Ulsan Metropolitan Government, the prosecution said.

From February to June 2008, Park, 51, served as the secretary to the president for executive planning and management. He then served as a deputy minister of the Prime Minister’s Office from January 2009 until August 2010, and as the vice minister of knowledge economy until last year.

Lee Yeong-ho, former Blue House secretary of labor, was also indicted on charges of leading efforts to destroy evidence in the case. Choi Jong-seok, an aide in Lee’s office, and Jin Gyeong-rak, a former public ethics official of the Prime Minister’s Office, were also indicted on charges of evidence destruction. While the first probe initially concluded that Lee In-gyu was the most senior official involved in the scandal, the reinvestigation found that Park, a key Lee associate, had ordered some of the operations. Lee Yeong-ho, a former Blue House secretary, was also indicted for having ordered evidence destruction.

The prosecution failed to determine whether two presidential chiefs of staff were aware of the illegal surveillance activities. Chung Chung-kil and Yim Tae-hee served in the post during the period. The prosecution received written testimonies from them earlier this month but didn’t question them directly.
The alleged involvement of the Office of the Senior Secretary to the President for Civil Affairs was also left out of the investigation. At the time, the office was led by Kwon Jae-jin, the current minister of justice. Kwon was not questioned during the second probe.

During the probe, the prosecution checked on about 500 spying operations on about 30 influential figures, including 10 politicians and eight senior officials.

Park Jeong-ha, presidential spokesman, apologized yesterday for the involvement of the former Blue House staffers in the scandal. “The Blue House will make special efforts to prevent a recurrence of a similar incident,” Park said.

The prosecution’s final conclusion was condemned by the opposition Democratic United Party.

“A private investigator could have done a better job,” said Representative Park Young-sun of the DUP in a press conference. “Does the prosecution think the people are stupid?”

Condemning the Lee administration for having committed a grave abuse of its power, the DUP demanded a National Assembly investigation, Park said.

“The key to the investigation was to lay bare the Blue House’s role in ordering the illegal surveillance and evidence destruction, particularly that of President Lee and his elder brother Lee Sang-deuk,” DUP Representative Kim Ki-sik said. He said the prosecutors ended up exonerating the Lee administration through a less-than-thorough probe.

The DUP also said it will ask the legislature to dismiss Justice Minister Kwon. The largest opposition party also scheduled a protest today. The DUP dismissed the Saenuri Party’s request to appoint an independent counsel to reinvestigate the surveillance scandal, arguing that it would be a waste of time.