No ripple effect registered on bourse after Spanish downgrade

No ripple effect registered on bourse after Spanish downgrade 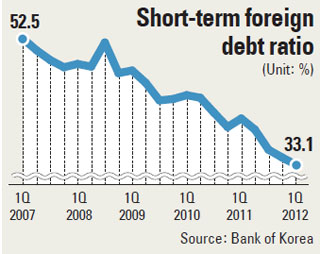 Korea’s financial market remained calm despite the downgrading of Spain’s sovereign debt rating by three notches to Baa3 from A3 by Moody’s Investors Service yesterday, showing resilience to the financial crisis in Europe.

A national election scheduled in Greece on Sunday is likely to mark a turning point in the euro zone crisis.

Korea’s financial market resisted the shock of the downgrade. The Korean currency strengthened against the greenback by closing at 1,166.3 won yesterday, down 2.1 won from the previous day.

“There are high expectations of the United States’ third round of quantitative easing, and this led to the strengthening of the won,” said Jeon Seung-ji, an analyst at Samsung Futures. “However, the won’s appreciation was limited due to uncertainty over the national election in Greece.”

“The downgrade was largely expected as the crisis has been going on for a while,” said Lawrence Kim, an analyst at Woori Investment and Securities.

It is much more stable than it was during the global financial crisis in 2008, even though investors have pulled significant funds from major emerging markets such as Korea.

Foreign investors sold a net 4 trillion won ($3.4 billion) of shares in May alone. According to a report by the Korea Center for International Finance, net selling by foreign investors is not based on their long-term strategy, but is part of their regular trading activity. “When external conditions improve, they may turn to buying again,” the report said.

The center predicted that if positive signals emerge indicating that the euro zone will make progress by working together, foreign investors may try to grab Korean shares at their current bargain prices.

The same logic holds true if China stimulates its economy further or if the U.S Federal Reserve and the European Central Bank take additional steps to provide liquidity to combat slowdowns in their respective geographical regions, it added.

But foreign investment is set to remain volatile as the financial crisis in Europe looks likely to drag on.

Another positive sign is that foreign investors are not selling off local bonds. On the contrary, they are buying more. In May, offshore investors held 88.5 trillion won of local bonds, including treasuries, according to the Financial Supervisory Service, continuing this year’s upward trajectory in their holdings.