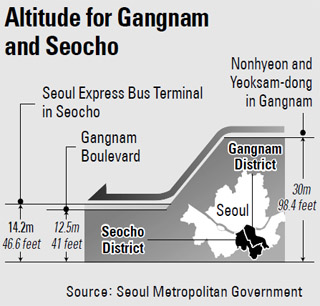 A question to officials at district offices in Seoul: “Which district office is responsible for the cost of rainwater management if it rains in Gangnam and flows into the Han River after passing through Seocho?”

As of right now, no one knows the answer.

If it rains heavily in the Gangnam region, the rain flows down to Seocho. When heavy rain swept southern Seoul last July, many buildings in the Seocho district, including the headquarters of Samsung Group, were waterlogged.

The two wealthiest districts in Seoul are now arguing over the cost of wastewater disposal. The Seoul Metropolitan Government said on Monday that the Seocho District Office had filed a lawsuit against the Gangnam office to share the burden and the case is now in progress.

The Seocho office won the first trial held in May.

The conflict between the two district offices is due to its geographic location.

The average altitude for the Gangnam Boulevard area in Seocho-dong is 17 meters (55.8 feet) lower than Nonhyeon and Yeoksam-dong of Gangnam District.

Rainwater from Gangnam flows into the Han River after passing through two pumping stations managed by the Seocho office.

In November 2007, the two offices agreed to share the cost for the rainwater generated in Gangnam by allotting 30 percent of the expense to the Gangnam office in 2007, 60 percent in 2008 and, finally, all of the expense to Gangnam in 2009.

The agreement, however, was broken in 2010 because the Gangnam District Council said the agreement was invalid as it wasn’t approved by the council. Then the Gangnam office stopped paying Seocho.

The two reopened negotiations, but failed to come to a resolution and now they are waiting for the court’s judgment.

“The Seocho office’s request of sharing the expense over rainwater is reasonable,” the Seoul Central Court declared in the first trial held on May 24.
The court ordered Gangnam to pay 344 million won ($295,152) for expenses generated in 2010 and 285 million won for 2011. Gangnam said they would file an appeal.

“There is no such precedent in Seoul for a district office requesting to share the expense of rainwater management with another,” Lee Chun-han, an official from the disaster prevention division from the Gangnam District Office told the JoongAng Ilbo. “All rainwater flows into the Han River in the end.”

Lee Eun-sang, an official of the disaster prevention division at the Seocho District Office, said, “We are spending hundreds of millions of won to manage rainwater coming from Gangnam only because Seocho is located on lower ground than Gangnam. We need to provide a reasonable solutions for this issue because the summer monsoon season is coming.”