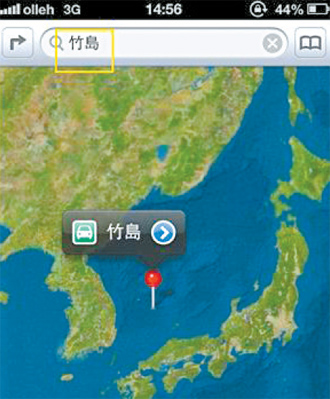 The new map service in Apple’s forthcoming iOS6 operating system for iPhones and iPads marks Dokdo as Takeshima, Japan’s name for the Dokdo islets. “No match found” appeared when Dokdo was searched for.

A new map service to be included in the new operating system for the iPhone and iPad is disorienting Koreans because it labels Dokdo by the name used by the Japanese, Takeshima.

On Monday, Apple introduced a beta version of iOS6, the new operating system for its popular mobile devices, in San Francisco. It includes its own, new mapping service, which will replace the Google Maps used in earlier iPhones and iPads.

The problem for Koreans is that there’s no Dokdo on the map. When “Dokdo” is searched for, a pop-up declares, “No match found.” If one manually scrolls to the East Sea, the islets are labeled “Takeshima.”

Korea and Japan both claim sovereignty of Dokdo, although Korea has effective control.

“The map service was created in the same way as Wikipedia, a web encyclopedia that includes individual’s input and data that other map producing corporations have,” Park Jeong-hun, an official at the PR department of Apple Korea told the JoongAng Ilbo.

“Under the law, Korea only provides geographic intelligence to corporations whose servers are in Korea and prevents map information going overseas for security reasons,” he said. “Maps marking the island as Dokdo were therefore excluded.”

The official added that most of the map data used was provided by Japanese corporations.

It’s unclear if the problem is fixable.

“I don’t think there is something the corporation can do for this problem,” he said. “We may try to find solutions like Google did in the past. They cooperated with Naver and Daum, Korean portal Web sites that provided correct map information.”

Some aggressive Korean Apple fans tried to find out which corporations participated in the map project, while others recommended a boycott of Apple products until the problem is fixed.

“The wrong map information came from a Japanese corporation called ‘INCREMENT P CORP’,” a blogger wrote on the Internet. “They marked Dokdo as Japanese territory at their own discretion.”

“Everyone who cares about Dokdo should request Apple to fix the map,” wrote another.