Baekjangam Hermitage pagoda is one of a kind

Baekjangam Hermitage pagoda is one of a kind 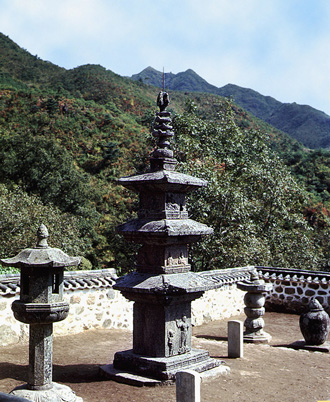 
This historical treasure is a three-story pagoda built on farmland south of the Baekjangam Hermitage located within the Silsangsa Temple. The temple is on the western side of the Cheonwangbong Peak in Mount Jirisan and was built by the Buddhist monk Hong Cheok in the third year of King Heungdeok’s reign.

The pagoda is distinct in three ways. First, pagoda floors are typically smaller and shorter the higher they are, yet the sizes of these floors are uniform.
Second, unlike other pagodas in the era, this has single stone roofs rather than multilayered ones. Finally, this pagoda is dominated by carvings of a Bodhisattva image, several images of a heavenly being, a lotus flower and the Samjonsang figure.

As a “free” pagoda, this structure is an outstanding example of the inimitable beauty of the United Silla Dynasty.

The photos and text for National Treasure are provided by the Cultural Heritage Administration. For more information, call (042) 481-4650 or visit www.cha.go.kr