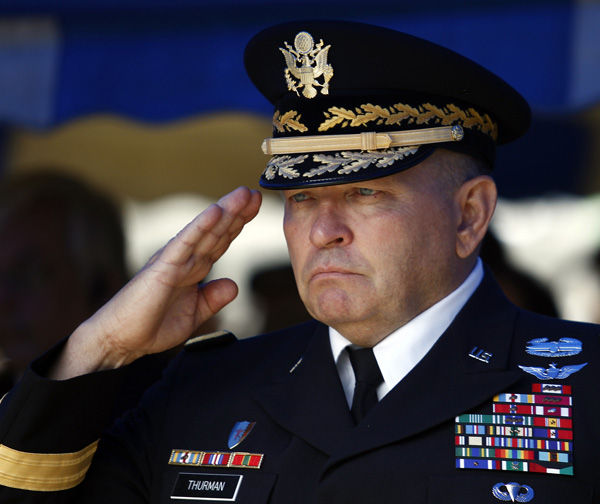 “We are currently in the process of bringing in ATACMS missiles and MLRS rocket launchers to the U.S. forces in Korea,” a USFK official told the JoongAng Ilbo yesterday. “Though we cannot disclose the specific number, we are aiming to extensively reinforce the forces before the end of this year.”

The official’s comments come after James D. Thurman, commander of U.S. Forces Korea, said he has requested the U.S. Department of Defense increase the number of Apache helicopters deployed in the South.

“This equipment is able to perform equivalently to ballistic missiles, which can be effective in deterring the North,” the official said, adding that they will also help counter the North’s latest threats.

The ATACMS is a tactical missile that is nicknamed “steel rain,” referring to how pieces of missile fragments fell from the sky during the Iraq War. The missiles were arranged for the Korean Army for the first time in 1999.

The MLRS is a multiple rocket launcher that can discharge 12 rockets in one minute.

In addition to the ATACMS and MLRS, there is also a possibility that the U.S. forces in Korea will procure other advanced weapons. The United States has recently sent officials including Secretary of Defense Leon Panetta and the Joint Chiefs of Staff to Korea to discuss overall military strength.

The U.S. Department of Defense recently agreed to sell 2,000 Mine Resistant Ambush Protected (MRAP) vehicles to Korea that were used in Iraq and Afghanistan.

“The U.S. agreed to sell MRAP fighting vehicles to Korea,” said a high-level Korean government official, adding that the U.S. had been unwilling to sell the vehicles overseas.

“Korea will purchase 2,000 vehicles and will bring them in 2013 and position them on the front line in the following year. There will be improvement in how the Korean Army responds in case of an emergency because our operational reach will be expanded.”

Currently, the Korean Army operates jeeps that have been redeveloped using Kia’s commercial Retona jeeps produced in the 1980s and 1990s. They are known to have no protective devices and are considered too old to operate in the mountainous front-line areas.

The Korean government is planning on purchasing MRAPs at $85,000 per vehicle, significantly less than the typical $2 million price tag.

“Though the vehicles were used by the U.S. Army during the Iraq War, we are planning on bringing in only quality ones,” the official said. “The price is almost free of charge as the U.S. is aware of how desperate the Korean Army is of improving combat vehicles.”

South Korea and the United States have been intensifying their partnership to improve security matters on the peninsula.

Panetta had said at a joint press conference that the two countries are making progress in talks to extend the range of South Korea’s ballistic missiles.
Following the 2+2 meeting, Foreign Minister Kim gave a speech at the World Affairs Council in Los Angeles and emphasized the two countries’ partnership is based on “shared values.”

“I have no doubt that an alliance built on shared values will far outlast an alliance based only on the cold calculation of national interest,” Kim said.

“Certainly, committing to a more comprehensive alliance demands more attention, more resources and more difficult decisions. But such is the price of progress, and it is a price we’re willing to pay.”