An unusual journey stitched with passion

An unusual journey stitched with passion 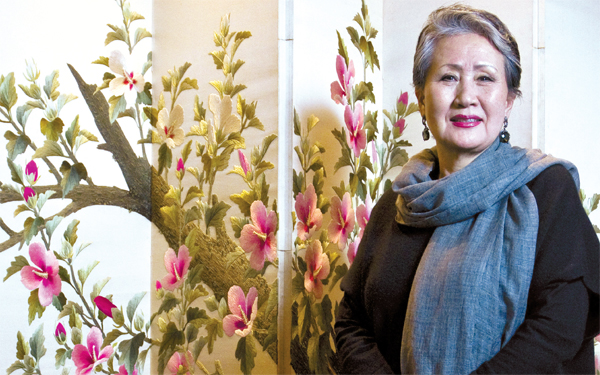 Chung Young Yang poses in front of one of her works - a screen depicting mugunghwa, or the Rose of Sharon, Korea’s national flower. [JoongAng Ilbo]


Like many women in war-torn, poverty-stricken Korea, Chung Young Yang was skilled with a needle and thread. But her passion for the art of embroidery took her down a unique path, pursuing the subject academically and embarking on a lifetime mission to promote artistic stitching and textures.

Chung was born in Seoul in 1936 and learned Western-style embroidery during her elementary school years. During the 1950-53 Korean War, she fled from the North Korean forces to a small village in the southern tip of the peninsula. Chung said it was in this remote area that she became truly inspired by Korea’s traditional embroidery. She learned from women in the village how to pick cotton, sew clothing, reel silk off cocoons and dye fabrics.

After the war, Chung ran a small academy where women could learn to stitch designs and sell them to feed their families. In the 1960s, she was invited to host an exhibition on Korean embroidery in Japan. She saved up enough money to travel across the world and collect historic textiles.]

Chung then made a risky move to the United States, where she studied an art form that had not been traditionally pursued by academics The gamble paid off. She pioneered the academic study at New York University in the 1990s and has displayed her own works at the Metropolitan Museum of Art, the Smithsonian and the Blue House.

“You can say my life is like a needle and a thread,” Chung said during an interview with the Korea JoongAng Daily. Asked what she meant by the symbolism, Chung said it wasn’t a metaphor at all:
“That’s all my life has been about - needles and threads,” she said with a laugh. The following are excerpts from the interview. 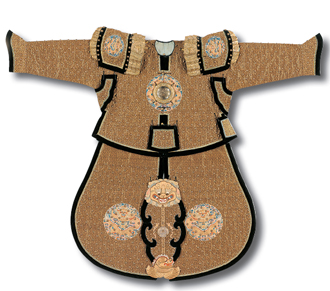 Q. It’s quite amazing how you learned the techniques while taking refuge during the war. Could you share with us what it was like during those years?

A. I’ve always known embroidery. My mom worked on it and I learned it in elementary school, so it was a familiar scene growing up. But that was all Western-style embroidery.
While our family was fleeing from the North Koreans, we saw these young village girls stitching embroidery designs late at night in their houses under the dim light from oil lamps. They were preparing to get married and the embroidery was for their dowry.

And I remember thinking that they were beautiful and breathtaking to look at. During that time, there was a school, but it didn’t offer a regular scholastic curriculum. What we did at ‘school’ was pick cotton, weave cloth and reel silk off cocoons. Unlike today, we couldn’t buy clothes or threads. So we had to be self-supplying and self-sufficient.

Such an environment naturally allowed me to learn embroidery from A to Z. And in that sense, while we were really poor back then, I considered myself to be rich.

I think that is what gave me the confidence and guts to open an embroidery academy in a tiny room in Wonhyo-ro [in Yongsan, central Seoul] in 1965 where women would work, eat and sleep. I guess it is tantamount to a vocational school of today. These were such destitute times - men, women, the young, the old, they all had to work. Food was scarce and getting by one day was a challenge.

So what prompted you to go to the United States and study embroidery there?

We were lucky. In 1967, our academy was invited by the Handcraft Culture Association in Japan to hold an exhibition in Tokyo. We were all fully motivated and passionate to show Korean embroidery and spirit. And after it was over, we decided to donate the money to the physically challenged in Japan.
Then suddenly I became a star.

I was featured on NHK [Japan Broadcasting Corporation] and was interviewed by many other mass media outlets. When I came back to Korea, the Blue House wanted my products. And the Korea Trade-Investment Promotion Agency [Kotra] vowed to support me so that I could go abroad to promote Korean embroidery at foreign expos. And along the way, we were also invited to hold an exhibition in the United States.

When I think of it now, I was a young girl with the brains and boldness.

But later on, such attention from the media and the public really hit me: I mean, I know every aspect of Korean embroidery’s functions. But what about its origins, history and significance and its relationship economically, politically and diplomatically?

That’s where it started: Going to the U.S. to study embroidery.

And in the process, I started collecting. It was because there were limitations with studying with just the data. I had to touch things and tear things apart to fully get to know the materials and techniques. So I would skip meals and save stipends and started buying relics. They cost tens of thousands of dollars and all of my friends called me crazy.

Your Ph.D. dissertation compared the embroidery of Korea, China and Japan and garnered a lot of attention. But still not many Koreans know how Korean embroidery differs from those of its neighboring countries. Can you explain the difference?

Embroidery of a certain country has a strong tie to the economic, political and diplomatic circumstances of the country. So explaining the differences in Korean, Chinese and Japanese embroideries requires an understanding of all of that. Also, the differences involve a wide range of elements: the materials, stitching techniques, composition and patterns.

But very simply put, you could say Korean embroidery is more sincere and honest as well as personal and wishful.

Japanese embroidery tended to put more of a focus on functions and practicality, while Chinese embroidery - especially during the Qing Dynasty - put more emphasis on authority and flamboyance.

But if you look at Korean history, two of the major embroidery items were used as dowry like the pillow ends and insignia badges used in official robes. So imagine a mother making embroidery for her little girl that she is about to send away to another family, or a wife who wishes one day her husband will pass the government official exam and enter the royal court.

Naturally they carry symbols and writings that imply the wishes of blessings and happiness such as peony or lotus flowers and turtle and pine. And every piece is unique and one-of-a-kind, with the heart and soul of the one that made it being different in each case. This is because embroidering never evolved into a commercial business in Korea as was the case, for instance, in China. 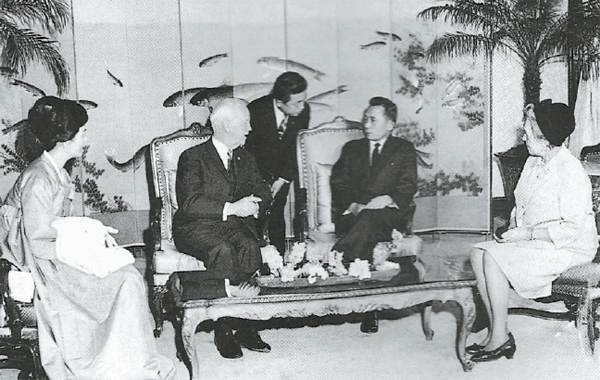 Former President Park Chung Hee and the first lady, Yuk Yeong-su, greet envoys from Germany in front of the “Unity” screen made by Chung Young Yang. Provided by the museum


You’ve donated some 600 pieces of embroidery you’ve collected to Sookmyung Women’s University. Are there any items that you have a special attachment to?

I always tell people that what is most important is the mind of the person that is doing the embroidery. With that said, I have to say one of the items is the 10-panel screen depicting carps that I made in 1967 and 1968 at the request of the Blue House.

Back then, security and harmony in the country [among the factions in the country as well as between the North and South] was the wish of every Korean. And I wanted to convey that through my work and thus named it ‘Unity.’

I heard from somewhere that carps always travel in groups and never individually. But I had to see carps for myself to be able to draw them, right? So I purchased carps and observed them.

When you look at it now, there are a few red carps among the gray ones. The red ones symbolize the North.

Another work I made commissioned by the government is the screen depicting mugunghwa [the Korean national flower]. Usually this specific flower doesn’t grow from one big trunk as in this screen, but I made it as such so I could convey my wish for reunification.

[Both of these works are kept within the Blue House, according to Chung. The replicas are currently at the Chung Young Yang Embroidery Museum of Sookmyung Women’s University.]


What works are you focused on at the moment and how would you like to see embroidery further develop as a field of study?

I believe I’ve contributed in establishing embroidery as a field of study and setting up databases on it so others who also wish to study will have an easier time than I did. They can refer to what I’ve studied and go further from there.

Right now, I am focused on the works of the Seol Won Foundation I’ve set up in New York whose primary goal is to promote the textile arts in general as well as cultural exchanges between the West and the East through lectures, workshops and sponsors of various cultural and artistic programs. [Seol Won is Chung’s pen name. It translates into Korean as snowy fields and implies wishes to be clean and innocent as snow.]

Also, throughout my career I came across many of the ancient, precious Korean embroidery items kept at places like Chicago History Museum, Peabody Essex Museum and Newark Museum, among others in poor conditions and oftentimes in wrong labels and explanations. I wish I can contribute to telling the visitors to such facilities the correct stories of such items.