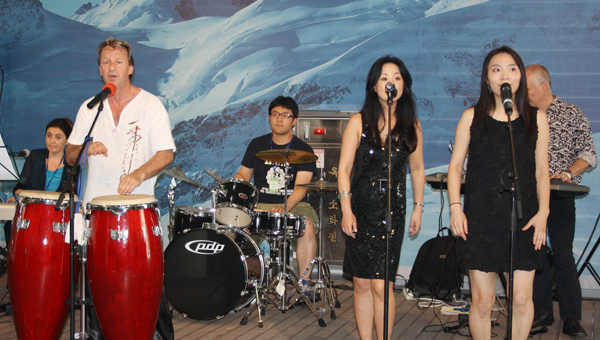 
A crooning Swiss diplomat and his group of expat band members filled the streets with Latin rhythm at the 2012 Yeosu Expo in South Jeolla on Saturday.

The members of the Xpat Band, an international band of professional and non-professional musicians, led by Swiss counselor of culture, Raoul Imbach, performed a repertoire of eight of their own songs in front of the Switzerland Pavilion.

In the middle of the performance, Imbach broke out into a short salsa number with a backup vocalist from Russia.

“A Swiss salsa?” called out an audience member.

“Yes, this is the Swiss way,” replied Imbach, who is in his fourth year in Korea, and is also a chef, composer, dancer and singer. Alongside his decades-long diplomatic career, he worked as a chef in Bolivia, learned dance in Costa Rica and became a local celebrity in Vietnam where his music career really took off while he was vice ambassador there. He also teaches free salsa lessons here.

Several people walking by asked when the performance was taking place as they saw the band equipment being set up in the early afternoon, and Switzerland Pavilion employees scattered fliers. But being a “street performance,” the Xpat Band relied on their music to attract a crowd.

The band, one year in the making, has an age range from late 20s to early 60s and the nationalities represented include Italian, Russian, Chilean, German and Korean.

“I became a diplomat because of a need to go outside of Switzerland,” said Imbach, in an interview with the Korea JoongAng Daily on Thursday at the Switzerland Embassy in Seoul. “Diplomacy has a tendency to be very formal and very stiff, so when you can bring that barrier down and get to a more one-to-one contact, it’s very helpful, so [music] helps in diplomacy hopefully without losing the seriousness of the topics.”

“I find inspiration from women,” admitted Imbach. He has released nine CDs and is heading to record a tenth CD in a studio in New York.

His latest song, performed at the expo was “Agassi,” or “young woman,” which interwove Korean and English lyrics. “I’m a romantic writer, so a lot has to do with me and the experiences that I have. I used to write a lot when I was in the airport waiting for a flight.”

And he is well versed at traveling for concerts. Early Saturday morning the members departed from Seoul Station, instruments strapped to the back of their van for a two-day trip to South Jeolla where they performed a total of six concerts throughout the weekend.

Though the band had 11 members, only six were able to participate in the weekend concert at the expo due to busy schedules.

“I’m a classical pianist and never played Latin music before,” said keyboardist Elena Abalyan, a Russian piano professor at Suwon University. She has lived in Korea for five years. “But Raoul convinced me, and now, I’m doing a genre I never imagined to be doing.”

Not present at the concert was an Italian designer and guitarist who was away on a business trip and a Chilean professional percussionist with the Sejong Orchestra, who had a performance that overlapped with the Yeosu concert.

Rehearsals are held every Sunday at Imbach’s house. They see the rehearsals as a chance to have a meal and catch up. But in a room full of opinionated professional musicians, “There are fights as well because everybody has their own style,” admitted Frank Reich, Abalyan’s fellow piano professor at Suwon University who plays the synthesizer in the band.

Not all members are professional musicians. Backup vocalist Lee Jin-hee, a gynecologist, said, “I was originally in Raoul’s salsa class, and he told me to come visit a rehearsal. And somehow, I ended up as a backup vocalist.”

Shin Sung-yul, the youngest of the group at 29, is a robotics researcher at the Korea Institute of Science and a drummer in the band.

Oliver Roos, director of the Switzerland Pavilion said, “This performance was possible thanks to Raoul. I have heard the band perform before, and asked, why not perform here at Yeosu?”

Roos said that an average of 5,000 visitors visited the Switzerland Pavilion. It attracted long lines throughout the day with its interactive theme, including a glacier panorama and an ice core antechamber, the coldest room at the expo. Roos pointed out that Switzerland holds 7 percent of Europe’s freshwater supply though it is a landlocked country. Most visitors are Korean, he said.

Likewise, most of the audience members on Saturday were Koreans. Middle-aged women especially gathered around the band, seating themselves on the pavement, clapping their hands to the unfamiliar beats.

An old woman stood alone, walking closer to the sound of music through the crowds of people. The corners of her eyes crinkled under the shadow of her visor, and she began to bob her head to the Latin beat. As the concert came to an end she reluctantly parted from the throng of people as she received a call from family members looking for where she had wandered off to.

“I don’t understand the words,” said the woman from South Jeolla. “But I just like the rhythm of the songs.”