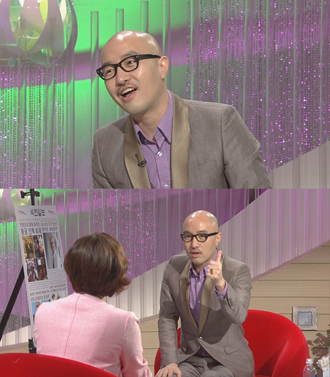 Entertainer Hong Suk-chun, the one and only openly gay comedian in Korea, has revealed that he has split with his younger boyfriend.
The 41-year old TV personality told Ilgan Sports recently that his former boyfriend, who is in his twenties, couldn’t take the attention from the public, which is why they split up.
“Netizens began obsessing over him and trying to find out personal details about him. He couldn’t handle it and I don’t think I will ever make the mistake of having a public relationship again,” said Hong.

The entertainer said that unlike himself, his ex was hesitant about revealing his sexual orientation.
“He couldn’t stand that others were finding out that he was gay and so I said ‘Let’s break up.’”
According to Hong, the two still remain good friends despite the end of their romantic relationship.

Hong first told the public that he was seeing a twenty-something year old man on JTBC’s talk show “Park Kyung-rim’s Oh! Happy Day” back in late April.
While on the show, Hong said he was in a dilemma about what he should do about the relationship.
“It’s gotten to a point where I’m wondering whether I should let him go,” Hong said at the time.