Out of the fog, into Open history

Out of the fog, into Open history 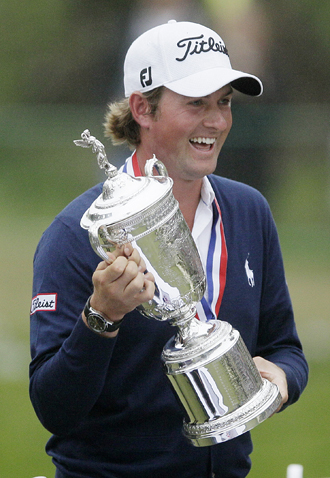 Overlooked for so much of the week, Simpson emerged on a fog-filled Sunday at the Olympic Club with four birdies around the turn and a tough chip out of a hole to the right of the 18th green that he converted into par for a two-under-par 68.

He finished at one-over-par 281, and it was enough to outlast former U.S. Open champions Jim Furyk and Graeme McDowell. McDowell shared second place at two over par with Michael Thompson, who closed with a 67.

Furyk bogeyed two of his last three holes and finished with a share of fourth place. McDowell had a 25-foot birdie on the 18th to force a playoff, but it never had a chance.

Olympic is known as the “graveyard of champions’’ because proven major winners were poised to win the U.S. Open have lost to the underdog. One of those was Arnold Palmer in 1966, when he lost a seven-shot lead on the back nine.

Perhaps it was only fitting that the 25-year-old Simpson went to Wake Forest on an Arnold Palmer scholarship.

“Arnold has been so good to me,’’ Simpson said. “Just the other day, I read that story and thought about it. He’s meant so much to me and Wake Forest. Hopefully, I can get a little back for him and make him smile.’’

No one was beaming like Simpson, who followed a breakthrough year on the PGA Tour with his first major.

No one was more disgusted than Furyk, in control for so much of the final round until he snap-hooked his tee shot on the par-5 16th hole to fall out of the lead for the first time all day. Needing a birdie on the final hole, he hit into the bunker. Furyk made bogey on the final hole and closed with a 74, a final round without a birdie.

McDowell, who made four bogeys on the front nine, at least gave himself a chance with a 20-foot birdie putt on the 17th and a shot into the 18th that had him sprinting up the hill to see what kind of chance he had. The putt stayed left of the hole the entire way, and he had to settle for a 73.

Tiger Woods, starting five shots behind, played the first six holes in sixover par and was never a factor. He shot 73 and finished six strokes back.

Furyk was fuming, mostly at himself, for blowing a chance at his second U.S. Open title. He also was surprised that the USGA moved the tee up 100 yards on the 16th hole to play 569 yards. It was reachable in two shots for some players, though the shape of the hole featured a sharp turn to the left.

“There’s no way when we play our practice rounds you’re going to hit a shot from a tee 100 yards up unless someone tells you,’’ Furyk said. “But the rest of the field had that same shot to hit today, and I’m pretty sure no one hit as [bad] a shot as I did. I have no one to blame but myself.”

Of the last 18 players to tee off in the final round, Simpson was the only one to break par. That didn’t seem likely when he was six shots back heading to the sixth hole, the toughest at Olympic. That’s where he started his big run.

His 7-iron landed in the rough and rolled five feet away for birdie. He birdied the next two holes, including a 15-footer on the par-3 eighth. And his wedge into the 10th settled three feet away, putting him in the mix for the rest of the day.

“It was a cool day,’’ Simpson said. “I had peace all day. I knew it was a tough golf course. I probably prayed more the last three holes than I ever did in my life.’’

Simpson’s shot from the rough on the 18th hole went just right of the green and disappeared into a hole, a circle of dirt about the size of a sprinkler cap. With a clump of grass behind the ball, he had a bold stroke for such a nervy shot and it came out perfectly, rolling three feet by the hole for his much-needed par.

Then, it was time to wait.

It was the third time in the last seven years that no one broke par in the U.S. Open. On all three occasions, the winner was in the locker room when it the tournament ended.

While Furyk will be haunted by his finish, McDowell can look back at his start - four bogeys on the front nine ? and his inability to find fairways. Even on the last hole, his tee shot landed in the first cut of rough.

“There’s a mixture of emotions inside me right now ? disappointment, deflation, pride,’’ he said. “But mostly just frustration, just because I hit three fairways today. That’s the U.S. Open. You’re not supposed to do that. You’re supposed to hit it in some fairways. And that was the key today for me.’’