More, much more, than two wheels and a piece of metal

More, much more, than two wheels and a piece of metal 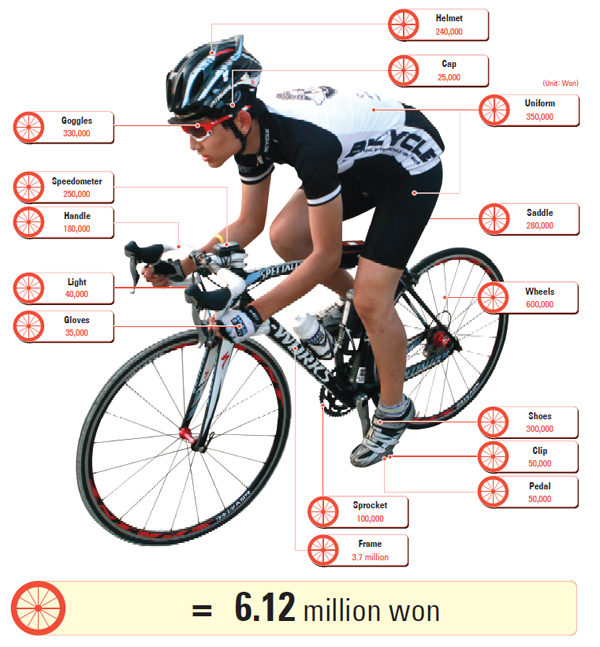 When Park Mi-kyung, 35, read the replies to her post on the Internet asking how much her husband’s new bicycle would cost, with a picture that she secretly took, she was speechless.

Park’s husband had told her he purchased the bike for about 1 million won ($865), which Park thought was already too expensive.

Then she found out that his “new baby” costs about 4.5 million won. Park said she only wanted to find out herself whether her husband - who she described as a “babe in the woods” - got ripped off.

“He used to ride a very cheap bike that he bought nine years ago, but ever since this cycling boom in Korea, he complained all the time that his bike was ‘a piece of junk’ and that he needed a new one in order to go out and lose that bulk around his waist that I always complained about,” said Park.

“So I allowed him to get a new one, but didn’t know he would spend that much. I mean, it’s just two wheels on an iron bar.”

Park added that although her husband refuses to tell her how much he spent on other equipment, such as a uniform and shoes, she now knows it would be beyond her imagination.

The Korean government has been making efforts to encourage cycling as part of President Lee Myung-bak’s green strategies. Noticing that people in European countries often commute to work and school on bicycles, the government began numerous efforts to make “environment-friendly” transportation a vital part of life in Korea. And it has emphasized that cycling is also considered an “inexpensive sport” compared to others such as golf or horse riding.

Local governments throughout the country have been expanding bike lanes, installing bike stands and revising regulations to encourage bike riding. The government also created a bike route that connects Seoul and Busan for bicycle touring.

Due in part to these efforts, Korea’s cycling population has skyrocketed, reaching eight million people or about 16.6 percent of the population, according to Statistics Korea.

However, the cycling boom can turn out to be a costly hobby for some Koreans.

On a recent Saturday evening, the Banpo Riverside Park along the Han River was alive with hundreds of cyclists enjoying their weekend on two wheels - most of them fully equipped from head to toe.

A 17-year-old high school student, Kim Dong-hwan, who was resting after two hours of riding with his friends, said he spent 700,000 won on his bike, which he assembled by selecting the best parts he could get within his budget.

“Of course, I want to get a really good bike, but I’m only a high school student and I can’t afford an expensive bike. So I purchased the frame from one brand, pedals and wheels from another and so on to create one that I like - at least,” Kim said, sounding less than thrilled with his 700,000 won pair of wheels and piece of iron.

“I want to get better ones, but I can’t afford them right now.” 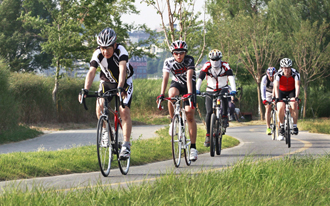 Riders decked out in full racing gear ride their expensive bikes by the Han River on a path that has a speed limit of 20 kilometers per hour. By Park Sang-moon

So far, Kim had spent a little over 1 million won on his new hobby that he started early this year.

“I am not sure if more expensive means better bikes, but watching older people on expensive bikes going past me, I feel a little embarrassed on mine,” Kim said. “When I grow up and earn money, I want to upgrade everything.”

Not only that, Hong spent nearly 3 million won more on a helmet, goggles, gloves, uniform and shoes that clip into the pedals to make him look like a professional.

“My Oakley goggles were also about 330,000 won. They can be used both during the day and night,” said Hong. “There are also consumables that you need to purchase frequently, like these clips on your shoes. They cost 50,000 won, and they need to be changed once every six months as they wear out.”

Just like Kim and Hong, many of the riders along the bank of the Han River were dressed in professional-looking outfits to match their expensive bikes.

“I mean, it would look weird to wear jeans or normal shorts and ride those expensive bikes,” Kim said.

But according to both Kim and Hong, their bicycles and “looks” have a long way to go before they belong to the “high-end league” of cyclists.

“I see so many older people on expensive bikes that cost well over 10 million won while wearing outfits from expensive foreign brands,” Hong said. “Because there are so many of them, people with cheaper ones tend to compare and feel like they need to ‘upgrade’ their looks and bikes.”

Hong admitted that some people spend a lot of money on bikes not for their performance but for “ostentation.”

“One of the main reasons for them to come out to the Han river on their expensive, high-end bikes wearing expensive gear would be to show off. I frequently see them zooming past people with cheap bicycles,” said Hong, who rides a 7 million won bike wearing more than 1 million won in gear.

“Most of their bikes, to be honest, are expensive because they are light and fast. If you purchased such a bike for its performance, you should be on the road and not by the Han River,” Kim said. “It’s like owning a Ferrari, but only going 60 kilometers per hour in bustling downtown.”

Kwak Keum-ju, a psychology professor at Seoul National University, also said Koreans have the tendency to “exhibit” themselves and that it “contributes to purchasing more expensive products.”

According to In Bo-sik, chief director of the Korean Bicycles Sales Cooperative, it is best for beginners to purchase a bike that costs 400,000 to 500,000 won.

“Beginners don’t need to start with a bike that is too expensive. The lighter the bike is, the more pricey it gets. At the same time, lighter means faster - but it also means more dangerous,” In said.

“Local bike companies are coming up with various models, but still, among us bike riders, we tend to feel that it’s not there yet [compared to foreign brands],” said Song Kwang-sik, head of an online Bike Riders’ Club.

According to a recent report by the Korea Customs Service, imports of finished bikes are skyrocketing, hitting $164.9 million last year, up by 246 percent from $47.4 million in 2002.

“The average price of a bike is on the rise as more people are willing to shell out for premium bikes, upgrading from 200,000 won models,” Yoo Jeong-yeop, a manager at LS Networks’ bicycle distribution unit, told the JoongAng Ilbo.

Moreover, as a large number of bicyclists ride foreign brands, prices for repairs and other services tend to be more expensive.

Yu Beom-ryeol, 31, recently went to a bicycle dealer shop to fix one of his wheels that had a broken spoke, but he was told he needed to change the whole wheel. Yu said that the difference in price was so high to change the wheel that he no longer trusts dealer shops.

However, the Korean Bicycles Sales Cooperative insisted that there’s a “silence agreement” among dealer shops on how much they would “conscientiously” charge customers.

“Customers these days are not that stupid. They already know about the price of a component through the Internet before visiting the shop,” said In from the cooperative.