Three try to fly over the cuckoo’s nest, get caught

Three try to fly over the cuckoo’s nest, get caught 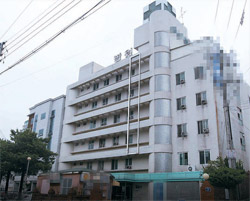 One patient, surnamed Kim, 41, there to be treated for a personality disorder, spoke in a confidential tone.

The two other patients in the lounge called Kim “professor” because he was the only one of them to have earned a bachelor’s degree.

A 41-year-old, also surnamed Kim and also being treated for a personality disorder, along with a 57-year-old man surnamed Lee, there for a drinking problem, nodded their heads in silence.

The plan was to escape the psychiatric ward of the hospital, which is a closed ward located at the top of a six-story building. Every window has bars on it and people have to pass through two locked gates to get outside.

The three had prepared the escape for a month. Kim, the “professor,” collected sleeping pills, which he received every day, and asked his acquaintance to wait outside of the hospital with a vehicle and 400,000 won ($345.6) in cash. Lee acquired gauze from nurses and the second Kim acquired duct tape.

On the evening of May 27, the “professor” brought a cup of coffee to a 40-year-old assistant nurse with a smile after putting two crushed-up sleeping pills in it. Around 11 p.m., the other Kim and Lee pretended like they were fighting in Kim’s room and the “professor” called the assistant to come quick.

As soon as the assistant, who was groggy due to the sleeping pills, entered the room, the three taped her to the bed and gagged her with the gauze. The “professor” later testified in questioning that he got the idea from the American film “The Fugitive.”

The three then changed clothes and opened the gate with keys they took from the assistant. The three fugitives headed to Lotte Department Store in Busan and separated.

“I was going to meet my father to ask why he put me in the hospital,” the “professor” told the police during questioning.

“I just wanted to spend the rest of my life fishing,” the second Kim said.

However, their hope didn’t last for long. Lee, who headed to his hometown of Milyang, South Gyeongsang, was caught in one day while drinking soju he purchased with the 100,000 won he had received from the “professor.”

Kim was arrested after he fell asleep fishing in Jangyu County in South Gyeongsang the day after Lee was caught. The “professor” evaded police pursuit for seven days.

He was finally arrested on June 2 at his father’s home by police who were waiting for him.
By Kim Yoon-ho[sakwon80@joongang.co.kr]