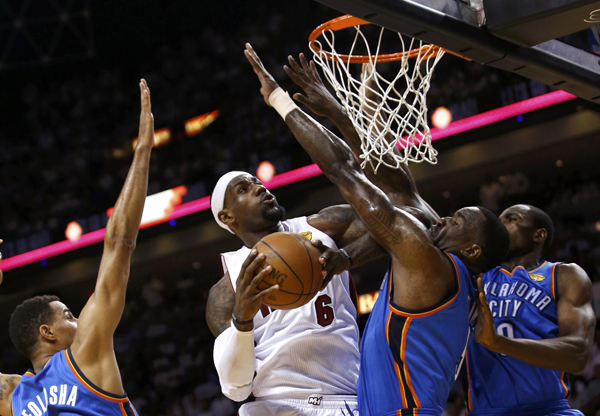 
LeBron James could hardly stand, certainly couldn’t run. Good thing all he needed to do was shoot.

Better get well fast, LeBron. You’re one win away from the biggest party of your life.

A limping, grimacing James shook off left leg cramps to hit a tie-breaking 3-pointer with 2:51 remaining and the Miami Heat held off the Oklahoma City Thunder for a 104-98 victory Tuesday night and a 3-1 lead in the NBA Finals that no team has ever blown.

“I was just trying to make a play,” James said. “If I was out on the floor, I wanted to try to make a play with the limited mobility I had at that time, and I was happy I was able to come through.”

Game 5 is Thursday night and James will have a chance to finish a nine-year chase that started in Cleveland before he famously - or infamously - left for South Florida before last season.

“Of course it’s there to think about,” said James, making it clear he plans to play. “I’ll be ready for Game 5.”

With James watching the final moments, Mario Chalmers finished off a stellar 25-point effort that matched Dwyane Wade. James had 26 points, 12 assists and nine rebounds, missing a shot at a triple-double only because he was on the bench at the end after thigh cramps emerged following a fall near the Thunder basket.

The Heat needed all James could give and more to hold off Russell Westbrook. He scored 43 points for the Thunder, who wasted an early 17-point lead but were never out of the game because of their sensational point guard. Kevin Durant had 28 points but James Harden threw in another clunker, finishing with eight points on 2-of-10 shooting. Westbrook and Durant were the only Thunder players to score in the last 16:46.

“Shots were falling,” said Westbrook, who was 20 of 32. “It really doesn’t mean nothing. We didn’t come out with the win.”

James stumbled to the court on a drive midway through the fourth quarter, staying on the offensive end of the floor as the Heat regained possession on a blocked shot, and he made a short jumper that made it 92-90. After Westbrook missed a jumper, the Heat called time out as James gingerly went to the court. Unable to walk off, he was carried to the sideline by a pair of teammates.

He returned to a huge roar with a little more than four minutes left and the Heat down two, and after Chris Bosh tied it, James slowly walked into a pull-up 3-point attempt - perhaps doing so knowing he couldn’t drive by anyone - and drilled it.

“That 3 was just sheer will and competitiveness, to contribute in some way,” Heat coach Erik Spoelstra said.

That made it 97-94, and when Wade followed with a layup with 2:19 left, the Heat finally enough room to withstand Westbrook, who kept coming all night.

Chalmers, the player who was struggling so badly that the Thunder put Durant on him in hopes of avoiding further foul trouble, made nine of 15 shots, scoring more points than he had in the previous three games.

“Obviously LeBron James is one of the most dominant players in the game, and he explodes many nights scoring-wise. But we’ve always got his back, and certain nights like tonight when he wasn’t feeling his greatest, you have guys like Mario Chalmers step up, big plays, big moments,” Wade said.