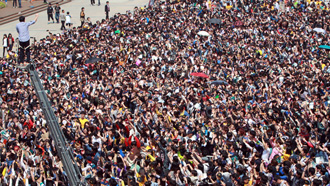 “Super Star K” is back and has more than 2 million applicants as the show prepares for its fourth season.

The number of applications was the most ever for an audition show and caught Mnet by surprise. “We thought we’d not exceed the 1,970,000 mark, which is how many we had for season three,” said a network representative.

“Basically, since we opened applications March 8, we’ve had 18,867 people apply per day.”

The network attributes the phenomenal amount of interest to its various initiatives to look for talent.

As well as the usual online registrations, CJ E&M allowed applicants to register via KakaoTalk and at various karaoke venues.

The success of previous contestants, such as Busker Busker and Ulala Session, is also thought to have fueled aspiring hopefuls in signing up.

Meanwhile, the show’s judges Lee Seung-chul and Psy may have to fulfill their pledge of running up Mount Cheonggye with their tops off as they vowed to do if more than two million people applied.