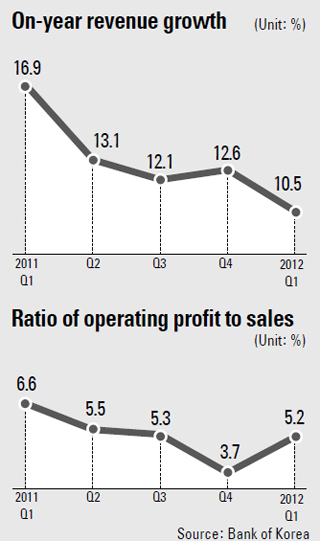 Local companies saw their revenues rise but profits fall in the first quarter compared to the same period last year on the back of rising prices of commodities and crude.

Their revenue climbed more than 10 percent in the first three months, according to the Bank of Korea, which surveyed 1,549 listed and 190 non-listed companies.

Revenue was still puttering upstream but at a slower rate given that it grew 12.6 percent in the previous quarter on-year.

Furthermore, the average ratio of operating profit to sales, a key barometer of profitability, was 5.2 percent for the January-March period. This was worse than the 6.6 percent posted the previous year but a significant improvement from 3.7 percent at the end of last year.

Local firms’ profitability has been trending lower since it peaked in the first quarter of 2011.

The ratio of local companies’ pre-tax net income to sales, another gauge of profitability, stood at 6.6 percent in the first quarter, down from 7.5 percent a year earlier, the BOK said.

The decline in profits comes as the higher prices of crude oil, iron ore and other commodities moved up, forcing up overall production costs.

The central bank’s latest report showed that the total assets of those local businesses surveyed grew 2.7 percent in the first three months on-quarter, and almost as much on-year. Their sales expanded 10.5 percent on-year, compared to 16.9 percent growth in early 2011.

The BOK said the economy advanced 2.8 percent on-year in the first quarter and estimated that growth will reach 3.5 percent for the entire year, a decrease from the 3.7 percent tallied for 2011. Finance Minister Bahk Jae-wan has been keeping an optimistic outlook on the economy, claiming it can hit 3.7 percent growth. However, as the euro zone crisis continues to linger, the government is already contemplating lowering this official forecast.

The ratio, which measures a company’s capacity to cover financial costs with its operating profit, came in at 417.7 percent in the cited period, down from 515.3 percent in the previous year.