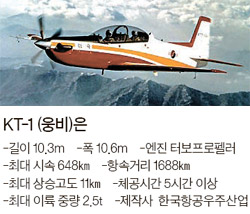 RIO DE JANEIRO - The prospect of South Korea’s export of its trainer jets to Peru appeared optimistic as the leader of the South American nation strongly hinted at the possibility during his meeting with President Lee Myung-bak.

According to a senior presidential official, Peruvian President Ollanta Humala told Lee during their meeting on Wednesday that the country will make a decision on the trainer jet project this week.

The two leaders were in Brazil, attending the United Nations Conference on Sustainable Development, better known as “Rio+20.”

“President Humala asked for a sideline meeting during the conference and raised the issue first,” the official said. “There is a high possibility that Korea will be selected.”

Developed jointly by the Korea Aerospace Industries and the Agency for Defense Development, KT-1 was the first trainer aircraft to be built with indigenous Korean technology.

Since its development in 1998, the Korean Air Force has operated 85 aircraft.

If Korea wins the project, 20 jets, worth about $200 million, will be exported to Peru. The two countries have engaged in talks about the project since early last year and Peru has shown interest in purchasing 10 KT-1 aircraft and another 10 KA-1 light-attack aircraft, which are modified KT-1s.

“Since President Humala requested the meeting and brought up the issue first to say that the decision will be made this week, it is highly likely that we will win the project,” the presidential aide said.

If the deal is confirmed, it will be Korea’s third export of KT-1. Indonesia and Turkey were the two previous buyers.

During his visit to Seoul last month, Humala also spoke positively about the project, saying there was “significant progress” in the two countries’ negotiations and that Peru has a strong interest in bolstering its defense and weapons development cooperation with Korea.

At the meeting, the Peruvian leader also expressed hope that more Korean companies will participate in the country’s energy and infrastructure developments, promising the full support of his government.

The two leaders also talked about the recent helicopter crash in Peru that killed eight Koreans. “I hope that the two countries can get over the tragedy and deepen their cooperation,” Lee was quoted as telling Humala.

According to the official, Humala agreed with Lee and said the country provided every possible support for the victims and their families although the rescue operation was very difficult because of the climate and the mountainous location of the crash.

The meeting in Brazil was the two leaders’ third encounter. The first took place on the sidelines of the United Nations General Assembly in September 2011 in New York, and the second took place during Humala’s visit to Korea last month.

Humala served as a military attache to the Peruvian Embassy in Seoul in 2004 and is known for his friendly view toward Korea.