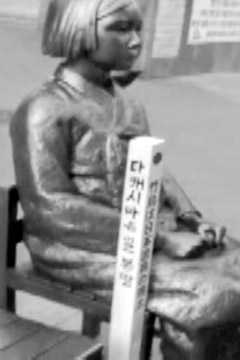 A wooden stake which reads, “Takeshima is Japan’s territory,” in both Korean and Japanese is placed next to the sculpture of a teenage Korean girl representing so-called comfort women who were forced into sexual slavery by the Japanese military during World War II. Screen capture from JTBC

An online video clip that a 47-year-old Japanese activist uploaded recently of him planting a stake in front of the Japanese Embassy in Seoul is stirring controversy over the wartime sex slave issue.

The Seoul Metropolitan Police confirmed on Thursday that a man named Nobuyuki Suzuki recorded a video clip on Tuesday of him attaching a 90-centimeter (3-foot) tall white stake to the Peace Monument.

On the wooden stake was written “Takeshima [Japan’s name for the Dokdo islets] is Japan’s territory” in bold, black letters in both Korean and Japanese.

The monument is a sculpture of a teenage Korean girl representing so-called comfort women who were forced into sexual slavery by the Japanese military during World War II.

It was installed in December, last year, in front of the Japanese Embassy in Junghak-dong, central Seoul.

The video was taken by another far-right Japanese activist assumed to be in his 20s, according to sources.

Suzuki formerly led a volunteer group of radical right-wing activists who cleaned the grounds of the Yasukuni Shrine in Tokyo.

He was also part of a group led by Japan’s Liberal Democratic Party lawmakers who tried to visit the Dokdo islets in August to claim it as Japanese territory. They were denied entry and returned home.

The red sun of the national flag of Japan was also painted on the stake. The police said that Suzuki uploaded the video on YouTube and his blog (http://blogs.yahoo.co.jp/ishinsya/44081653.html) and in the clip he said, articulately in Japanese, “There is a comfort woman prostitute statue right in front of the Japanese Embassy.”

He also said, “In half a year, two anti-Japanese monuments have been erected,” referring to the monuments installed in front of the Japanese Embassy in December and the War and Women’s Human Rights Museum in Mapo last month. He also said two other “prostitute monuments” were installed in New York and New Jersey. In the clip, when the Korean police stationed near the embassy tried to remove the stake, Suzuki came back and tied it to the statue. He then repeatedly said, “This [monument] should be torn down!”

The police are considering the possibility that it could have been Suzuki who left a similar stake in front of the War and Women’s Human Rights Museum on Monday. Also in March, a similar object was found in front of the Korean Embassy in Tokyo, according to police.

The Mapo Police Agency has launched an investigation into the case yesterday at the request of the War and Women’s Human Rights Museum.

“We have checked the CCTV and found two men in suits holding stakes in front of the Japanese Embassy,” the police said. “The act of tying a stake to the Peace Monument can be considered property damage, but there are many things to consider since the case should be handled from a diplomatic approach.”

The police said Suzuki left the country for Japan on Wednesday. “The [recent] incident is extremely regrettable from a non-governmental point of view,” said an official from Seoul’s foreign ministry.