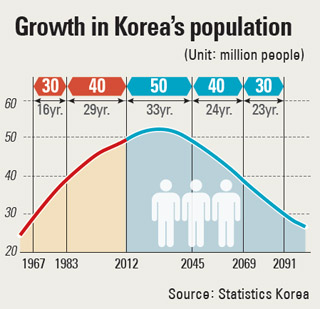 Korea’s population is expected to surpass 50 million today, making it the 7th country in the world to reach the “20-50 club” - boasting both a population of 50 million and $20,000 in per capita national income, Statistics Korea said yesterday.

Korea will become the 25th country surpassing 50 million in population in the world.

The report said that Korea’s population will make up 0.71 percent of the world’s population, which is expected to hit 7.05 billion today.

The report said there will be a drop in people of working age although the overall population will continue to increase for a while, which will lead to a slowdown in economic growth and a spike in welfare spending. According to the state agency, about 35.98 million of the Korean population, or 72.8 percent, are considered economically active, but the number starts decreasing after 2016, and falls to 32.89 million in 2030 and 28.87 million in 2040.

“One of the main causes of the low birth rate, especially after the 1990s, was because more women began to take part in economic activities,” said professor Kim Jeong-sik from the Economics Department of Yonsei University. “That boosted the average age of first marriages and childbirth for women. The government needs to provide policies that encourage young couples to have more children, extending the childbirth grant, for example. The country should find solutions for the economy and also the future of Korean civilization.”