BOGOTA - President Lee Myung-bak had an emotional meeting with Colombian veterans of the 1950-53 Korean War on Saturday, saluting their sacrifice to defend the then little-known nation across the Pacific.

Sentiment swept over a Bogota hotel ballroom as veterans spoke of their wartime experiences and how proud they felt to see the war-ravaged nation rising as one of the world’s largest economies. 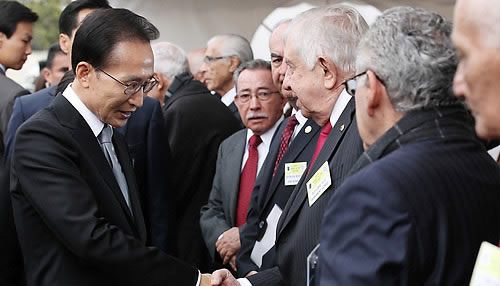 “The Republic of Korea of today exists because you fought for and staked your lives to defend the far-flung nation in the East that you didn’t even know the name of,” Lee said. “Had it not been for your help, the Republic of Korea could not have been defended.”

Colombia was the only nation from Central and South America to fight alongside South Korea against Chinese-backed North Korean forces. About 5,300 troops were dispatched halfway around the world to help fight the North’s invasion, of which 213 were killed and 567 wounded.

A total of 730 veterans are believed to still be alive.

Alberto Ruiz Novoa, a 95-year-old veteran, who later served as Colombia’s defense minister, said he participated in the Korean War at age 36, and that he felt his sacrifice paid off as he watched South Korea’s economic rise.

“I am very much proud and satisfied that the valor and sacrifices of Colombian soldiers helped made South Korea what it is today,” he said.