Debate on evolution reignited over textbooks

Debate on evolution reignited over textbooks 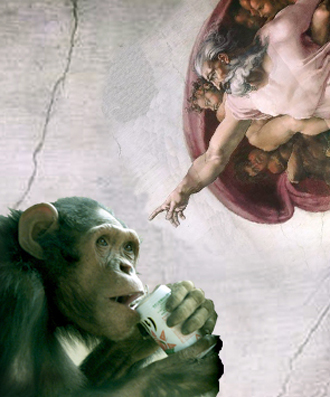 Conflict between pro- and anti-evolutionists has escalated half a year since several major publishers were approached by a local organization to delete or revise examples explaining the process of evolution from science textbooks for high school students.

In turn, the dormant evolutionists and biologists here have mobilized. On Wednesday, academics and researchers from the Paleontological Society of Korea and five other scientific associations gathered for the first meeting of the Committee to Promote Evolution to debate the issue in question, which is whether or not the archaeopteryx, a prehistoric bird from the Jurassic Period, was a transitional species between reptiles and birds.

The Ministry of Education, Science and Technology stated last month that six publishers had agreed to remove or revise high school textbooks containing references to the archaeopteryx as well as examples of the evolution of horses.

Jang Dayk, a Seoul National University evolutionary biology professor, and currently an active campaigner for evolution, said the newly founded committee released a statement to counter arguments which emphasized, “there are numerous fossils being continuously uncovered that show that the archaeopteryx has the mid-point characteristics between theropod dinosaurs and birds.”

The committee further emphasized, “the content on archaeopteryx and horse evolution cannot be deleted from high school textbooks,” and rather, “additional content should be added to enable students to have a more concrete understanding of the facts of evolution.” 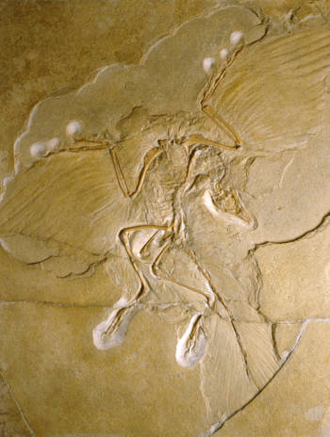 A fossil of an archaeopteryx, a prehistoric bird from the Jurassic Period first discovered in Germany in 1861, that may be barred from Korean high school science textbooks as an example of evolution.[JoongAng Ilbo]

Last December, the Education Ministry received a petition from the Society for Textbook Revise, a small special interest group which requested the deletion of the archaeopteryx as an example that proved evolution. They claimed that the example lacked substantial proof, and thus should not be taught to students as fact.

Currently, most high school science courses use the archaeopteryx as crucial evidence to support evolution.

Earlier this year in March, the society again requested a change in textbooks, this time regarding the evolution of horses.

The Education Ministry refrained from making a decision, passing the baton to seven publishers of high school science textbooks to decide for themselves whether to accept the petition or not. Six publishers agreed to the textbook revision.

A select few evolutionists responded that such a decision should not be made at the publisher-level without the consultation of experts, but were generally ignored.

Despite initial apathy from the Korean public, an overwhelming 86 percent of respondents in a survey conducted last week by the Pohang University of Science and Technology’s Biological Research Information Center stated “there is a problem” with the deletion of the archaeopteryx to explain the process of evolution.

The research institute announced on Tuesday the results of its survey conducted for five days from June 11, in which over half of 1,474 life science researchers, professors and graduate and college students surveyed responded that “there is a serious problem” with the deletion, while another 32 percent responded “there is a problem.”

Respondents to the survey especially found an issue with the procedure in which changes to textbooks were allowed, stating “there was not substantial verification from experts” to support the revisions. Rather than leaving the decision to publishers, some 42 percent of those surveyed stated that the National Science & Technology Commission should take the lead in addressing the issue while 76 percent said the Education Ministry should helm the decision.

Jang stated in a phone interview with the Korea JoongAng Daily Wednesday that there is also a dearth of evolutionists in the country, as scientists opt for better-paying sectors.

Thus, he initially had difficulty in recruiting biologists for his cause. “I believe that the attention from foreign media also has to do with the fact that in America, there are many associations that propel similar measures, but never have they been accepted like this. In some ways, it’s very frustrating and embarrassing,” he said.

As to why there was such belated reaction from the Korean public on this issue, he stated that some like himself were watching passively, thinking “no way will a situation like this be actualized.”

He admitted, “When [the Society for Textbook Revise] propelled the petition in December, it slipped by unnoticed, but then they pushed another petition and the second time we began to realize they had snuck up on us with a sneaky method.”

He describes the current situation as “passing a ticking bomb” between the Education Ministry, the pro- and anti-evolutionists and the publishers.

And in the meantime, publishers have backed down from their initial statement, saying their textbook content is dependent on what the Education Ministry tells them to do.

“Nothing has been decided yet. Whether we delete or modify the contents of our textbook is dependent on the Seoul Education Office and the Education Ministry,” said a representative of the science textbook division for Sangsang Academy, one of the publishers that have been approached by the Society for Textbook Revise.

“Even if you speak to any of the other publishers, you won’t get any concrete answers right now.”

An employee at YBM’s high school textbook publishing division, The Text, who asked to remain anonymous, said, “We did get a request for a change, but in our case, we did not have content that we especially needed to delete or change in this year’s edition. Our description of the archaeopteryx was very basic and brief from the beginning, and our textbooks do not mention horse evolution. This year’s edition won’t look much different from last year, but of course, whether changes will be made is dependent on what the Ministry of Education tells us to do.”

Chairman of the Society for Textbook Revise Lee Kwang-won stated, “We are frustrated that the mass media is simply labeling us as a religious-affiliated organization. We are an academic association and simply want to correct the mistakes in evolutionary theory such as horse evolution and the archaeopteryx.”

“If there is something that is not correct, we promote taking it out; if there is an aspect that is unclear, we would like textbooks to include different perspectives. There are aspects of evolution in the Korean science textbooks that have not been revised since the 1950s,” he added.

The society was founded in 2009 as an offshoot of the Korea Association for Creation Research.

It has around 150 members but received more online subscribers on its Web site after the textbook deletion issue was publicized, said Lee.

The society is comprised of educators, he said, and “if members happen to be affiliated with a religion, that does not have to do with what the society is promoting,” which is “a clarification of scientific facts.”

Lee said that the society initially had received confirmation from said publishers stating that the areas in question would be deleted or modified from textbooks.

Yet, while the Society for Textbook Revise claims the issue at hand is not one of creationism versus Darwinism, a 10,000-member Daum Cafe organization, Club Anti-Christianity, on Tuesday called for a meeting of its members in both Seoul and Busan on Saturday declaring, “Christianity’s longtime desire for the attack of evolution has recently become full-blown,” that “until now, debate on creationism and evolution was not even a disputable issue for intellectuals.”

A member with the ID Haneul posted on the Daum forum, stating, “The deletion of evolution - are we in medieval times?”

In response to the public backlash, the Education Ministry stated last week that it will set up a panel for future revision of science textbooks and will be reviewing the situation with science experts before textbooks are sent to be printed by September this year.