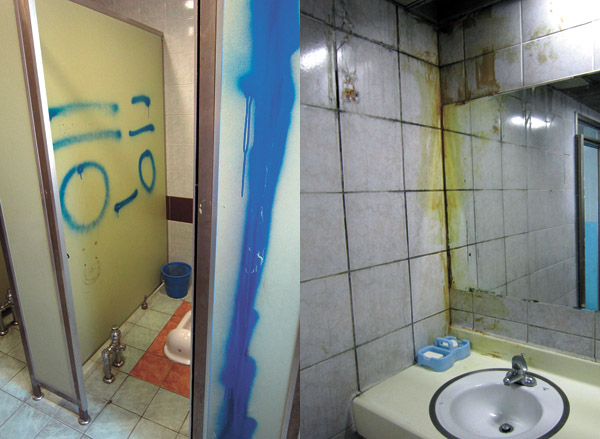 “Mom, I have to go to the bathroom,” cried Lee Do-hyung, a fifth-grade student in Seoul, as he ran into the house.

“My son has ‘school-restroom-phobia’ because of poor sanitary conditions there. He tries so hard to avoid going to the restroom at school and now suffers from constipation,” Park Kyung-ah, Lee’s mother, told the JoongAng Ilbo.

Lee isn’t the only one with “restroom-phobia.” In a survey of 1,244 students from fourth to sixth grade conducted earlier this month, jointly by the JoongAng Ilbo and the Citizens’ Coalition for Restroom Culture, only one out of 10 respondents, or 13.8 percent, think school restrooms are clean.

A number of school restrooms the JoongAang Ilbo visited in Seoul showed poor sanitary conditions. Restrooms stank due to broken ventilation systems. Toilets didn’t flush. Many lacked toilet paper. At one elementary school in Yangcheon District, Southeastern Seoul, water was dripping from the ceiling. Complaints from students about school restrooms included foul odors and lack of toilet paper and soap, as well as unsanitary conditions.

On the condition of restrooms, 38.2 percent of survey participants voted foul odor as the No. 1 reason why they hesitate to use restrooms. General dirtiness followed with 31.1 percent. Lack of soap and toilet paper was cited by 12.7 percent of respondents, while lack of light was picked by 9 percent of students.

Suggestions by students for improving the conditions don’t appear to be demanding. About one-third, or 33 percent of respondents, asked for air freshener to be installed while 21.4 percent requested hand-dryers. A little less than two out of ten students, or 17.4 percent, asked for toilet paper, and 12.9 percent of respondents would like to have soap ready to use in the restroom.

It is well-known in Seoul that U.S. President Barack Obama openly envies and praises Korean parents for their high education ambitions and goals for their children. Thanks to competitiveness in the education sector, the country has performed well enough in the global economy that it entered the “20-50 club” last week, which consists of nations boasting more than $20,000 GDP per capita with a population of more than 50 million.

There is one place in Korean society, however, that lags far behind the strength of Asia’s fourth largest economy: public school restrooms.

Experts point out sanitary conditions in school restrooms remain the same as they did in the 1990s.

Among the 10 elementary schools in Seoul the JoongAng Ilbo randomly picked to visit, only three in 10 were found to have more western-style toilets rather than traditional ones, which students have to squat to use. One elementary school in northern Seoul has only one western-style toilet among its 92 toilets, even though the school underwent renovation seven years ago.

“Most households nowadays have toilets with bidets,” a parent told the JoongAng Ilbo. “It is no wonder kids hate using school restrooms.”

A survey of 530 students from elementary to high school conducted by the Seoul Metropolitan Office of Education in 2009 shows that seven in 10 students don’t defecate at school.

“School principals prefer old-style toilets to western-style for easier and cheaper maintenance purposes,” said an official at the Seoul education office of the possible reasons for an unbalanced number of traditional school toilets.

Female bathrooms at another elementary school in northern Seoul have transparent glass doors, showing who is inside and what they are doing. “I am so embarrassed while in the restroom when I see boys outside,” said a sixth-grade female student.

Restrooms at another elementary school in southern Seoul had their windows all shut with no fans running, even when the temperature outside was 30 degrees Celsius (86 degrees Fahrenheit). Neighboring households’ repeated complaints about odors coming from the restrooms prompted the school to close the windows.

What’s equally important as having quality utilities is maintaining proper management. Most schools, however, were found to have only one or two janitors in charge of not only restrooms, but also all areas of the school, such as the floor and stairs.

“I am assigned 22 restrooms. I can only use a hose to clean them every two or three days,” said a contracted janitor surnamed Kim.

Making the case worse, the amount of funding for replacing school utilities, such as restrooms, air-conditioning and classroom windows, provided by 16 education offices nationwide, was reduced to 860 billion won ($742.18 million) last year, one-third of the total amount provided in 2008.

“The legal responsibility falls somewhere between the education office and local government, so no one is quite sure which authority is in charge of school bathroom management,” said a government official.

For schools in Seoul, overall maintenance funding from the Seoul education office this year dropped to one-fourth of the amount given four years ago, from 599 billion won to 159.4 billion won. Restroom-specific funding by the Seoul Education Office also plunged from 99.4 billion won to 9.5 billion won over the same period.

Some school officials argue the free-school lunch initiative is the main reason for the cuts. “Budgets on utility maintenance were cut significantly in order to implement the free-lunch policy,” a high school principal said. “Now it has become virtually impossible to win the finance backing from the Seoul Education Office.”

A Seoul Education Office official refuted the claim, saying “the education office focused more on renovating outdated school facilities from 2008-9 than the average year, so the extent of funding for improving facility conditions was larger than usual,” adding that it wasn’t because of free-lunch initiatives that funding was reduced.

“If schools run short of financial support for remodeling, the focus should be placed on proper maintenance and teaching students how to keep their restrooms clean,” said Lee Hwa-ryong, Professor of Architecture at Kongju National University in South Chungcheong.

“In Japan, when building or renovating restrooms, the first thing the school does is to listen to parents and students and apply their opinions to the project. Why don’t we do the same?”