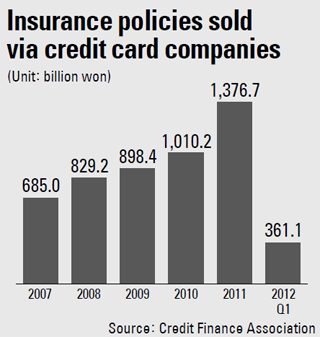 Credit card companies have recently been aggressively marketing sales of insurance policies, as this has become a lucrative income source.

However, in many cases, the policies are sold without properly explaining the details. In some cases, they seem to resemble other financial products, such as long-term deposits with high interest.

A 36-year-old housewife surnamed Choi recently received a call from a telemarketer who offered her a “financial product” with a promised return of 50 percent on the principal if she subscribed to it for 15 years. The telemarketer added that the subscriber could also withdraw or cash-in anytime she wanted to. However, Choi was never informed that the product, which was only offered to limited number of “outstanding customers,” was actually an insurance policy.

“Only when I asked if this was an insurance policy did the telemarketer admit that it was,” Choi said.

Sales of insurance policies now take up a substantial amount of the earnings other than the companies’ main business, or earnings made from customers’ credit card use and loans.

“The profit made from selling the policies by phone is much higher than the cost,” said a credit card company employee. “Sales of these are becoming a major source of income for credit card companies, which are under heavy pressure [by the government and civic groups] to lower their commission fees and restrain credit card loans.”

Recently, credit card and insurance companies have been collaborating more closely. The former are tossing customer information to insurers to help them sell policies. As a result, instead of receiving commission, they get paid for assisting with marketing.

This is seen as a win-win strategy for both.

“There’s a growing alliance between credit card companies and insurers but not to the extent that it violates the law on [respecting] private information,” said an employee at the Credit Finance Association.

Since late last year, the nation’s seven credit card companies have signed 37 agreements with life insurers, and 48 with nonlife insurers.

The problem of selling aggressively via telemarketing is that, in many cases, the policies are not properly explained to customers.

“When trying to persuade a customer to subscribe to a policy by phone in a short period of time, there is a strong possibility that the person on the other end of the line may fail to understand or misunderstand the product,” said Ahn Cheol-kyung, Korea Insurance Research Institute vice president. “There is a need to step up regulations and the accountability for those selling insurance policies in partnership with financial companies.”