Phelps loses, but on track for 8 events in Olympics

Phelps loses, but on track for 8 events in Olympics 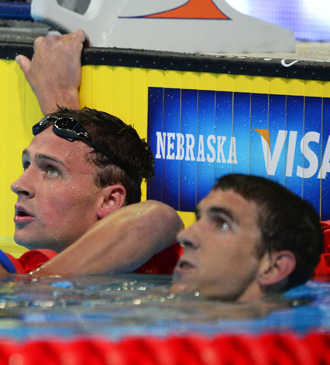 Phelps, though, has put himself in position to go for another gaudy number: eight gold medals at the London Olympics.

Lochte won his latest showdown with the winningest Olympian ever, beating Phelps for the first time in the 400-meter individual medley at the U.S. swimming trials on Monday.

In taking the first spot on the Olympic team, Lochte extended a dominance of Phelps that goes back to last year’s world championships, where the 27-year-old Floridian won five gold medals and both head-to-head races against Phelps.

“The first race is always the hardest,” Lochte said. “I can take a deep breath now, relax and whatever happens, happens.”

Phelps started strong on the butterfly leg, his best stroke, but Lochte took command when they switched to the breast-stroke. He built a lead of about a half-body length and held off Phelps in the freestyle finish, cruising to the wall with one arm extended in 4 minutes, 7.06 seconds.

Phelps claimed the second Olympic spot in 4:07.89, setting himself up for eight events in London - something he said he wouldn’t do again.

Phelps plans to retire after the London Games and is clearly eager to end his career with another dazzling performance. He has already won 14 gold medals, more than any other athlete.

That he is even swimming the 400 IM shows Phelps has regained his focus and dedication.

Going forward at the trials, Phelps will be heavily favored to claim a spot on the U.S. Olympic team in four other individual events: the 100 and 200 butterfly, 200 free and 200 individual medley. If he swims on all three American relays, as expected, that adds up to eight - the number of golds he captured in 2008 to eclipse Mark Spitz’s Olympic record.

“Now we kind of know where he is and we feel pretty good about it,” Phelps’ coach Bob Bowman said. “This is the catalyst for everything else. When this goes well, everything else goes well.” AP