[Interview] The race is on for smart stem cells

[Interview] The race is on for smart stem cells 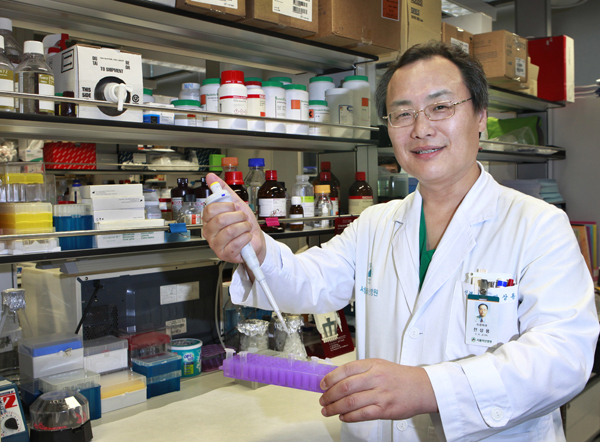 
For decades, doctors and scientists from around the world have been working to find treatments for incurable diseases such as cancer and leukemia. One of their ranks, Jeon Sang-ryong, a professor and neurosurgeon at the Asan Medical Center in eastern Seoul, had a breakthrough last month after years of research and was able to spark a ray of hope for people suffering from paralysis, due to his work on stem cell therapy.

For the first time in the world, Jeon and his team were able to objectively prove that three out of 10 patients suffering from general paralysis showed significant signs of recovery after receiving the therapy. The process involved injecting their own mesenchymal stem cells into their injured spinal cords.

In the past, the transplantation of these stem cells - which fall into a variety of cell types, including cartilage and bone cells - after spinal cord injury has shown positive results in animals, helping with increased tissue preservation and the recovery of lost functions, but less was known about its effect on humans.

“After receiving stem cell therapy, the three paralyzed patients showed improvement in their daily activities,” said Jeon in an interview with the Korea JoongAng Daily last month. “Our team was also able to note changes, such as decreases in cavity size via magnetic resonance imaging.”

Q. Can you explain the method of your stem cell therapy in more detail?

A. Ten paraplegics who had suffered traumatic cervical spinal cord injuries participated in the clinical tests. None of them had muscular atrophy or psychiatric problems. What we did was harvest the mesenchymal stem cells from each patient’s iliac bone, which is on top of the hip bone, and cultured them for four weeks to grow them in large numbers. After four weeks, we injected the added stem cells into each patient through a lumbar puncture, and repeated this process eight weeks later. The reason why we used mesenchymal stem cells was because, unlike other ones such as embryonic stem cells, they are safe and there have been no reports of morphological changes when injected into an injured spinal cord.

What improvements did you find in the three patients in terms of their daily activities?

All three became paralyzed due to car accidents. To share one of the cases, a 49-year-old surnamed Park had a car accident in 1998 and, unfortunately, he became paralyzed from the neck down. He also lost his sense of smell. He tried everything to recover, in the hope that he could at least wiggle his fingers or lift his elbows. He underwent Chinese acupuncture and other rehabilitation treatments for eight years, but all to no avail. In October 2006, he met me and decided to try stem cell therapy at the Asan Medical Center. After the treatment, he showed gradual signs of improvement in terms of his motor skills and upper body movement, and was able to move his elbows slowly. He was also able to rise up to a sitting position without assistance. Picking up heavy objects with his hands and eating food with chopsticks also became things that he could do regularly - something that was impossible for him to imagine before.

What happened to the seven patients that failed to see any benefits?

The remaining patients showed no improvements in terms of being able to carry out daily activities during the six months of follow ups after the clinical tests. The reasons differ. They each showed different symptoms. For example, one showed mild motor skills improvement for six months, then died of pneumonia. Another patient didn’t experience any neurological changes after the treatment and refused to take part in follow-up assessments. What I would like to say, though, is that we’re only at the beginning stages of this major, profound research that later on could permanently cure incurable diseases.

So you haven’t found a magic elixir?

At the current stage of our research, our aim is not to cure all patients, but to prove that there are stem cell treatments that work.

You submitted a research paper regarding this study to Neurosurgery. What kind of feedback did you get from overseas?

When doctors submit a research paper, the impact is usually calculated by how many others quote the paper. Our paper was published in the May issue of Neurosurgery, and it will take four or five months to see its impact on academic circles.

What direction do you think Korea should take in terms of stem cell research?

It’s clear what scientists and doctors should be aiming for. The reason why people are so interested in stem cell studies is because they provide possible treatments for incurable diseases. There are no therapies currently to cure dementia, Parkinson’s disease, paralysis or Lou Gehrig’s disease.?.?. What we do know is that stem cells have the ability to differentiate into other cell types. And, for the first time, our team has proven that stem cells are able to cure nerve-related diseases like paralysis. The impact, however, is very small as of now because we only proved that three out of 10 responded to the treatment. That’s why we need to continue developing and searching for even more efficient treatments. Smart stem cells are what we need.

What about government support?

This is very important. The best scenario would be for hospitals and experts to come up with ideas for future studies, and for the government to invest in them. Investment should be aggressive and long term.

This is urgently needed in Korea, in my opinion, because other countries like China and the United States are also interested in this sector and are investing large sums of money in it. The two countries have more human resources than Korea, but the size of their respective investments are incomparable. I would say we’re currently in an industrial war. A medical war.