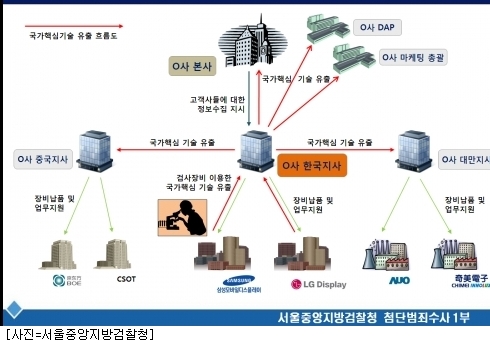 The prosecution charged another four, who were supervisors of the arrested, without detention on the same charges. The seven suspects are employees of an Israel-based automated optical inspection company.

The suspects gathered the knowledge in building active-matrix organic light-emitting diode (Amoled) displays from November last year to January while working as inspectors at production lines of the two display makers.

The investigators said one of the suspects, identified only as An, had taken a dozen photos of core technology, including a diagram of a yet-to-be released 55-inch Amoled display panel, then loaded them to thumb drives.

An hid his information-filled thumb drive under an insole in the heel of his shoe or attached it to the inside of his belt with tape.

The suspects’ next move was to hand over the stolen information to company headquarters in Israel and the Hong Kong office as well as display manufacturing firms in Taipei and mainland China.

Of special concern is the possibility that 36-year-old Kim, another suspect, leaked the technology to China’s biggest panel producer BOE, a rising contender in the display industry.

The prosecution said Kim sent an e-mail to an employee of his company based in Hong Kong saying, “I am not sure if this information will be valuable to BOE, but it is very sensitive, so please be careful in handling it.”

An official at the prosecution team said the damage would not only apply to the electronic groups but to the country’s overall economy, adding “possible changes in dominance of the future TV display market could be expected.” The prosecutors expected at least a 30 trillion won ($25.92 billion) loss to occur because of the leak.

The time gap between Korean display producers and their rivals could also be shortened as the leaked information was top-secret technology.

The prosecution said the detail of the leaked diagram photos was good enough that duplicates could easily be produced if the leaked information falls into the hands of rivals.