The government finally admitted the impact of the prolonged euro zone crisis by sharply lowering its economic growth outlook for this year.

The Ministry of Strategy and Finance downgraded the GDP growth prediction from 3.7 percent to 3.3 percent. 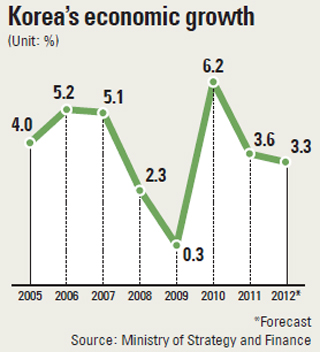 The slowing growth is largely the result of a sharp decline in the country’s exports.

“Although it was expected that the uncertainties regarding the European financial crisis would be resolved by the first half of this year, we now think that the crisis will be protracted and is the constant factor in the scope of macroeconomics” said Bahk Jae-wan, minister of strategy and finance, at a press briefing yesterday. “We reflected the changed global economic situation in our economic outlook.”

Along with the cut in the growth forecast, the government announced an economic policy package for the second half of the year. It plans to bring down inflation to 2.8 percent from its current 3.2 percent, add 400,000 new jobs and have an $18 billion current account balance.

“In the second half of this year, we will focus on revamping economic nature,” Bahk said, “and we will reform the distribution of basic goods so consumer price hikes can stay in the two percent range.”

The ministry’s move came after many private institutions lowered their growth estimates. The new forecast was lower than anticipated by the market.

“The government tried to give a hard-hearted assessment and communicate with the market,” said Choi Sang-mok, the director general of the economic policy department at the Finance Ministry.

Concerning criticism that the government has been too optimistic about its growth estimates in the recent past, Choi said it will try to narrow the gap between the market’s perception and its own.

“The country’s exports have been dwindling since the second quarter last year, and growth momentum has been weaker this year,” Lgeri said in a report.

Exports started to falter after the global slowdown triggered by the sovereign debt crisis in Europe, which some analysts predicted could be more toxic than the crisis sparked by the collapse of Lehman Brothers in the United States in 2008.

As the crisis plays out in Europe, recovery of the U.S. and Chinese economies is slowing. U.S. growth in the first part of this year is expected to be around 1 percent, China’s 8 percent  and the euro zone is supposed to have negative growth.

Korea’s exports to the three regions combined account for around 45 percent of its total. Total exports are predicted to increase by a mere 0.6 percent in the first half of this year.

“The government will keep its initial policy directions - increasing economic vitality and stabilizing the livelihoods of the working class - but, in the second half, more of the focus would be shifted to boosting the domestic market,” Choi said.

The ministry is planning to use up all of the money it planned to spend within the first half but hasn’t yet.

An estimated 8.5 trillion won ($7.36 billion) is planned to be newly added to the government coffers for the second half. Some 2.3 trillion won would come from government funds that can be used without approval from the National Assembly.

“We expect the addition to help raise the growth forecast by 0.13 to 0.15 percent,” Choi said. He confirmed the government is not considering earmarking a supplementary budget, worrying that such a move could worsen the country’s fiscal balance and increase national debt.

Predicting that business investments would decrease in the second half, the government decided to raise a 3 trillion won fund for facility investment, mainly for small and medium-size companies.

The government will encourage the private sector to make more investments, but private businesses are squeezed. “Declining exports of major Korean businesses would lead to decreases in their profitability, which causes them to cut jobs and make less investments,” said Shin Min-young, a researcher at Lgeri.

Securities firms are trimming their forecasts for earnings of leading companies in the second quarter. Woori Investment & Securities has lowered its Q2 operating profit prediction for Samsung Electronics from 7 trillion won to 6.63 trillion won, citing its memory chip unit that has been struggling throughout the quarter.

Samsung held a global management strategy meeting this week to find ways to weather the current storm. Chairman Lee Kun-hee’s remarks after his business trip to Europe early in May garnered attention as he said the region’s economic situation was worse than he had realized.

However, Samsung hopes the launch of the Galaxy S3 smartphone will help its overall Q2 performance, said Shin Jong-kyun, president of the mobile communications business, at the launching show on Monday.

Q2 earnings forecasts are not good for LG Electronics, either. Shinhan Investment cut the operating profit of LG from the previous 418 billion won to 360 billion won.

The financial industry sees a rosy picture for Hyundai Motor Group, with overseas sales on the rise.