Miserly Spain yet to hit peak form in Euros

Miserly Spain yet to hit peak form in Euros 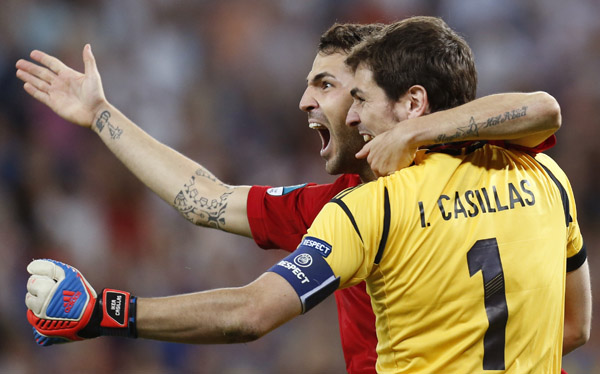 Spain’s Cesc Fabregas celebrates with Iker Casillas after scoring the decisive penalty shootout during the Euro 2012 championship semifinal match between Spain and Portugal in Donetsk, Ukraine, on Wednesday. [AP/YONHAP]


Spain has not been at its scintillating best at Euro 2012 but ominously for their opponents in Sunday’s final some rock solid defending means they will face Italy or Germany having conceded just one goal.

The Italians managed to find the net against the world champions in their opening Group C game, a 1-1 draw in Gdansk, Poland, but since then Spain has calmly dealt with the best Ireland, Croatia, France and Portugal could throw at them.

Portugal captain Cristiano Ronaldo was left a frustrated and forlorn figure following Wednesday’s 4-2 semi-final penalty shootout defeat in Donetsk, Ukraine, after some thought he might be the man to unlock a Spanish defense featuring his Real Madrid team mates Iker Casillas, Sergio Ramos and Alvaro Arbeloa.

The former World Player of the Year sent a low shot whistling past the post in the 31st minute but was otherwise restricted to a couple of free kicks which he blasted over the bar before he wasted a great chance to win the game in the 90th minute when he skewed a shot high and wide.

Spain’s goalless draw with Portugal before the shootout means they have kept a clean sheet in their last nine matches in the knockout stages of the European Championship and World Cup and the last team to score against them in a knockout game was France, who won 3-1 in the last 16 of the 2006 World Cup.

As coach Vicente del Bosque pointed out, it’s a pretty useful foundation on which to win matches.

“We never go out there to defend and we are not a defensive team but we are performing pretty well there,” he added.

Wednesday’s success means Spain joins the West Germany team of the 1970s as the only sides to reach three successive finals at European Championships and World Cups and they can eclipse the Germans, who lost the 1976 Euro final to Czechoslovakia, with victory in Kiev on Sunday.

As Del Bosque and his squad head to the Ukrainian capital, however, there will be much for them to ponder from a midfield display that was unusually ragged, especially in the first half. Reuters