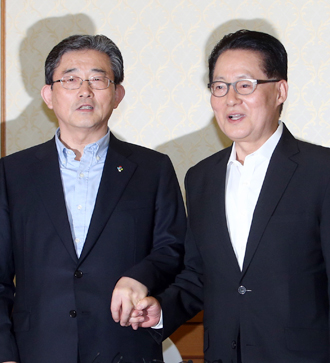 Ending nearly a month of delay in opening the legislature, the two main political parties yesterday made a rare promise to work together to scrutinize the qualifications of two opposition lawmakers dragged through a rigged primary scandal.

The 300 newly elected lawmakers were scheduled to open the legislature before June 5, but the rival parties couldn’t agree on the formation of key committees as well as other sensitive political issues.

Representative Lee Hahn-koo of the Saenuri Party and Representative Park Jie-won of the DUP met yesterday and finalized the formation of the committees. The two floor leaders also announced a series of agreements on controversial issues that will be addressed by the National Assembly in the coming weeks.

Over the primary rigging scandal of the minor Unified Progressive Party, the two main parties agreed to jointly sponsor a resolution to review the qualifications of UPP representatives Lee Seok-gi and Kim Jae-yeon, who earned their seats in the March primary. According to the agreement, 15 lawmakers each of the main parties will jointly create the resolution and begin the process of scrutinizing the qualifications of the two lawmakers as soon as possible.

The two lawmakers, who were elected as proportional representatives, were accused of rigging the primary to become the top candidates. The UPP conducted two internal probes and concluded that the primary was manipulated, but scandal continues to deeply split the progressive party between its largest faction and the current emergency leadership. Lee and Kim are members of the largest faction and they have also been criticized for having a pro-Pyongyang ideology.

Under Article 138 of the National Assembly Act, a lawmaker may submit to the speaker a request to examine the qualification of another lawmaker by gathering signatures of 30 or more lawmakers. According to Article 142, a vote at a plenary session will decide the fate of the lawmaker. A resolution to disqualify a lawmaker requires a concurrent vote of two-thirds or more of the 300 National Assembly members.

As the Saenuri Party has 150 members and the DUP has 127 members, they have enough power to remove representatives Lee and Kim.

With pressure snowballing on the two lawmakers to voluntarily give up their seats, they have resisted that demand. The DUP appears to have made a political decision to keep its distance from the UPP in the months leading up to the presidential election.

The UPP yesterday issued a statement expressing regret. “We express serious regret that the two parties made a decision irrelevant to our position,” said UPP spokeswoman Lee Jeong-mi. “We hope the two parties respect our self-reform effort.”

Kim issued a statement to say she had expected more from Park. “Park must withdraw from an agreement that is such an obvious political collusion,” she said. “I had no expectations from the Saenuri Party, but it is seriously disappointing that Park agreed with them.”

The Saenuri and DUP floor leaders also agreed on other issues, including a plan to elect the new National Assembly speaker on Monday morning. As of now, six-term Representative Kang Chang-hee of the Saenuri Party is nominated as the sole candidate to lead the legislature for the next two years.

The Saenuri Party and DUP also agreed to hold a National Assembly investigation into the scandal over the illegal spying on civilians and government abuse of power.

A special committee will be formed on Thursday and a Saenuri lawmaker will chair the committee.

The two parties also agreed to appoint an independent counsel to look into suspected irregularities involving the purchase of a site to build President Lee Myung-bak’s retirement home Naegok-dong, southern Seoul. Shortly after media reported the suspicious land purchase, the project was scrapped, but the lawmakers agreed to look further into the issue. The bill to appoint a special prosecutor will come to vote at the main session on July 23. The DUP will nominate the independent counsel.

The two sides also found compromise on the issue of holding a hearing on media strikes. The Culture, Sports, Tourism, Broadcasting and Communications Committee will hold the hearing.

The two parties will cooperate with the board of directors of the Foundation for Broadcast Culture, to be appointed in early August, to normalize broadcasters, particularly MBC, as soon as possible.

The demands of the labor union and the company will be handled based on reasonable management decisions, law and common sense, the two parties agreed.

The two parties also agreed to form a special committee by Thursday to carry out the confirmation hearings of the four Supreme Court justice nominees as their terms start on July 11.