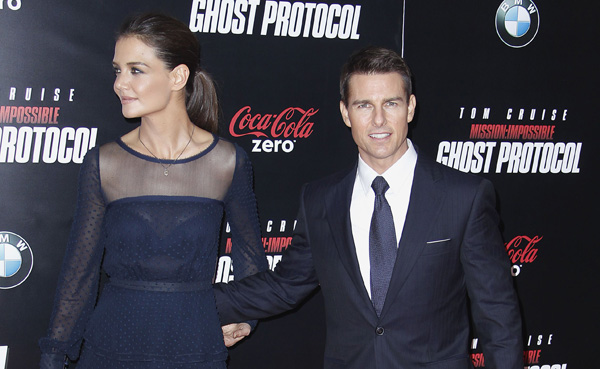 The News Corporation chief urged his Twitter followers to watch the story, which broke on Friday when Holmes announced she was filing for divorce from Hollywood A-lister Cruise, a prominent member of the Church of Scientology.

“Watch Katie Holmes and Scientology story develop. Something creepy, maybe even evil, about these people,” Murdoch (@rupertmurdoch) said on his Twitter account .

The fairy-tale Hollywood couple’s split was revealed when Holmes’ publicist announced that the actress had filed for divorce after five years of marriage, ending an unexpected love story dogged by tabloid rumors.

A spokesman for Cruise said the “Mission Impossible” star was “deeply saddened” by the news, fueling reports that his wife’s announcement had taken him by surprise.

Speculation about why Holmes wanted out has included suggestions she was concerned that Cruise was forcing their six-year-old daughter Suri deeper into the Church of Scientology.

The TMZ celebrity news Web site has reported that Holmes is seeking sole custody of Suri. Citing unnamed sources, it said she feared “that Tom would drag Suri deep into the church.”

“We’re told the couple had been arguing over Suri - that she’s now of the age where Scientology becomes a significant part of her life,” it said.

“Still stick to my story,” he added.

There was no immediate response to a request for comment from the Church of Scientology or from publicists for Cruise or Holmes.

A short time after his Scientology tweet, Murdoch was asked his views on Mormonism - in the spotlight currently as Mormon Mitt Romney takes on President Barack Obama for the White House.

“Mormonism a mystery to me, but Mormons certainly not evil,” the News Corp tycoon replied.