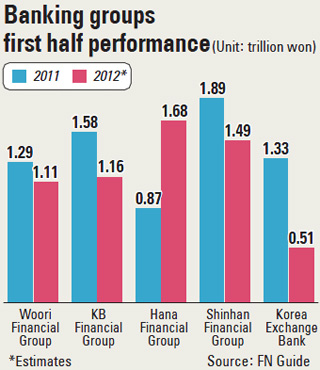 The global crisis stemming from the euro zone is affecting local financial groups as the earnings posted by major banks in the first six months of the year are estimated to have dropped nearly 15 percent on-year.

Additionally, the growing delinquency rate of household and corporate loans is becoming a major threat to the stability of the domestic financial market.

The combined net income of the country’s four major banking groups, including Woori Financial Group, KB Financial Group, Industrial Bank of Korea (IBK) and Korea Exchange Bank (KEB), is estimated to have fallen 14.6 percent on-year to 7.95 trillion won ($6.96 billion) in the first half, according to financial information provider FnGuide.

KB Financial is expected to have racked up a profit of 1.16 trillion won in the January-June period, down 26.3 percent from a year earlier, and Shinhan Financial Group is forecast to have suffered a drop of 20 percent in its first-half profit to reach 1.5 trillion won, the data showed.

But Hana Financial Group is expected to see its first-half earnings rise 1.68 trillion won from 869 billion won over the cited period after it took over KEB early this year, the data showed.

IBK is projected to have logged a profit of 834 billion won in the first half, a sharp drop of 16.2 percent from a year earlier. Korea Exchange Bank is also likely to see its first-half profit sink 62 percent on-year to reach 509 billion won

The anticipated weaker bottom lines come as banks are facing a set of downside risks, such as slowing economic growth and rising bad loans.

But some analysts were less pessimistic about the first-half performances of local banks as they logged gains of up to 3 trillion won last year by selling their respective stakes in Hyundai Engineering & Construction.

Analysts said local banks’ earnings may decline down the road on mounting bad loans. Delinquent loans have spiked this year due to the sluggish economy and weak property market.

Local banks’ non-performing loans accounted for 1.37 percent of their total lending as of the end of May, compared to 0.89 percent at the end of last year, according to the Financial Supervisory Service. The situation is expected to get worse as the global economy is likely to keep downsizing while banks’ net profits are expected to shrink further.

“Economic uncertainties and the likelihood of persistent sluggishness in the property market may cause bad loans to worsen and eat into banks’ profits,” said an official at Woori Bank.

Bank heads recently issued a warning about the rising risk and asked employees to ramp up their risk management.