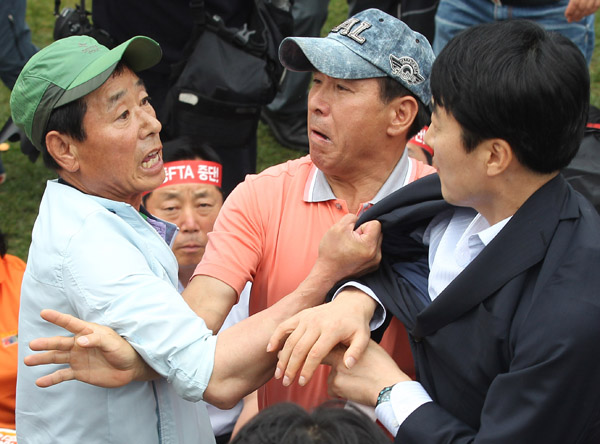 During a protest against the negotiation for a free trade agreement with China yesterday, a farmer grabs Representative Lee Seok-gi (right) from the Unified Progressive Party by the lapel and demands him to leave. The first-term lawmaker of the progressive minority party has faced criticism for alleged primary rigging and his pro-North Korean stance. [YONHAP]


Representative Lee Seok-gi of the Unified Progressive Party was grabbed by the suit yesterday by a farmer during his attempt to participate in a massive rally to protest the Korea-China free trade agreement.

More than 10,000 farmers from around the country gathered in front of Seoul City Hall in the afternoon to pressure the government to stop its efforts to sign a free trade deal with China. Shortly after the protest began at 2 p.m., Representative Lee appeared at the venue and walked toward the stage. He was invited by the Korean Peasants League to give a speech.

As Lee walked toward the VIP seats in front of the stage, about 10 farmers who recognized him and 20 reporters rushed to the lawmaker. A farmer then grabbed Lee by his collar.

“How dare you try to attend our rally, although you don’t even sing the national anthem!” the farmer screamed.

Other farmers also demanded Lee leave the event. “Get out you, Commie!” one shouted. “We don’t want someone who denies our country,” another farmer said. Some farmers used a sign board to hit Lee and threw beer at him.

The lawmaker withstood about 15 minutes of humiliation without any response.

While some other farmers tried to escort Lee back to the event, the police stopped him, expressing concerns about his safety. Only after an official from the Korean Peasants League ensured his safety was Lee able to sit with other members of the group.

“Because I came at the invitation of the Korean Peasants League, I didn’t know this would happen,” Lee said.

During the event, several lawmakers from the Democratic United Party and the UPP gave speeches, but Lee was not introduced.

The police said about 10,000 farmers participated in the rally, while the organization estimated 30,000. About 3,200 police troops came to manage the event, and no fighting took place.