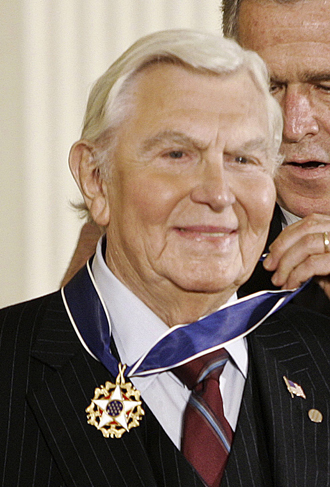 LOS ANGELES - Actor Andy Griffith, 86, a beloved icon of U.S. television for programs including “The Andy Griffith Show” in the 1960s and the popular legal drama “Matlock,” died Tuesday.

President Barack Obama led tributes to the star, calling him “a performer of extraordinary talent,” adding that he “was beloved by generations of fans and revered by entertainers who followed in his footsteps.

“He brought us characters from Sheriff Andy Taylor to Ben Matlock, and in the process, warmed the hearts of Americans everywhere. Our thoughts and prayers are with Andy’s family,” he said in a White House statement.

Griffith, who was awarded the Presidential Medal of Freedom by then-President George W. Bush in 2005, died at his North Carolina home, according to media reports. He became a household name for his eponymous series. He also played Sheriff Taylor in “Mayberry RFD,” set in the same fictional town as “The Andy Griffith Show,” said to be modeled on his hometown of Mount Airy, North Carolina.

As a child, Griffith sang in church, and joined a university drama club before becoming a teacher after graduating, according to industry daily Variety.

He got his big break in the 1950s when Ed Sullivan began featuring him on his national television show.

His most notable big screen role was in Elia Kazan’s “A Face in the Crowd” (1957), playing a country boy who rises to TV stardom in a performance described as “stunning” by industry database IMDb.

After a stint on Broadway, he launched “The Andy Griffith Show,” along with a young Ron Howard, who was later Richie Cunningham in “Happy Days” before a successful film career.

Howard tweeted Tuesday that Griffith’s “pursuit of excellence and the joy he took in creating served generations and shaped my life. I’m forever grateful. RIP Andy.”

Griffith formed his own production company in 1972, making several films and TV series, and was nominated for an Emmy award in 1981 for his portrayal in the 1981 television show “Murder in Texas.”

Apart from the “The Andy Griffith Show,” his other most famous role came as attorney Ben Matlock in the TV series “Matlock.” AFP