Samsung a matchmaker for SMEs

Samsung a matchmaker for SMEs 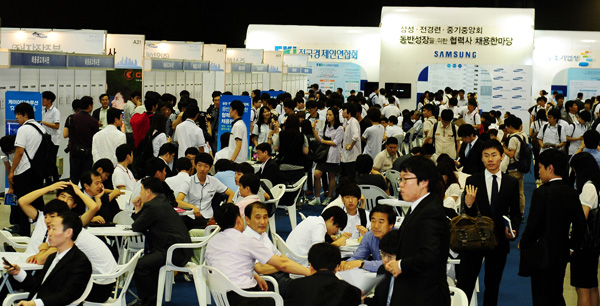 The floor of a job fair organized by Samsung Group at the Kintex exhibition and convention center in Ilsan, Gyeonggi, is crowded with roughly 6,000 job seekers as young as high school students to as old as retired baby boomers. [NEWSIS]


GOYANG, Gyeonggi - Under the scorching summer sun, the 4,900-square-meter (52743-square-foot) floor space of Kintex in Ilsan, Gyeonggi, was crowded yesterday with job seekers ranging from teenagers to laid-off baby boomers.

This was the first time that Samsung Group, Korea’s leading conglomerate, has organized a grand-scale job fair for its subcontractors to help achieve shared growth.

Samsung and its 11 affiliates, including Samsung Electronics and Samsung SDI, kicked off a four-day job fair in cooperation with the Federation of Korean Industries (FKI) and Korea Federation of Small and Medium Business (Kbiz), aimed at recruiting 1,670 young talents.

At the job expo intended to provide opportunities to job hunters and SMEs, 158 Samsung partners and affiliates participated in an attempt to secure skilled manpower.

About 6,000 applicants ranging in age from high school and college graduates to people well into their 50s lined up on the first day of the fair, applying for a total of 1,670 full-time positions.

As pre-interview applications were first accepted last month and many more interviews conducted on-site, expectations ran high that the fair would prove a bump for recruitment harvest.

“Around 3,500 interviewees, including 2,000 on-site applicants and 1,336 pre-reserved candidates, will receive job interviews at the site over the four days. After another round of interviews is held, 1,000 people will be employed,” said a member of the FKI.

Under the slogan of “Jobs for Youth and Elderly, Top Talents for Samsung Partners,” 37 partner corporations including Samhwa Yangheng and STS international were set to hire 368 high school graduates, or 30 percent of the group’s total employment quota.

The unusual flood of job seekers at a job fair for SMEs was mainly due to Samsung, which organized and sponsored the event, according to an organizer from the FKI.

“I’ve seen job fairs like this before, but never have I seen this kind of response,” said a man surnamed Choi from Dream Tech, a company that also organizes job fairs.

“Many people here seem to believe that the employers at this job fair, Samsung partners, are reliable even though they are not major conglomerates, probably due to the Samsung’s strong brand image,” he said.

The fair “not only aims to promote a diverse job market for high school graduates and middle-aged retirees, but also to help SMEs recruit skilled human resources,” said Kim Young-jae, chairman of Daeduk Electronics, one of Samsung’s partner companies.

However, some employers seemed reluctant to hire high school graduates or job hunters in their mid-40s and above, raising concern that the employment rate for applicants may not be as high as was initially hoped.

Asked about the realistic prospects of high school graduates landing a job, Hyun Soo, president of Meister School, said 30 percent of the job openings have been reserved for them, with a special bias for students who specialize in vocational training.

The government has been promoting vocational education at 35 vocation meister high schools nationwide in an effort to ramp up their job prospects.

Some employers said SMEs are taking the opportunity to scout out highly educated workers at the fair, who are usually only interested in working for bigger companies.