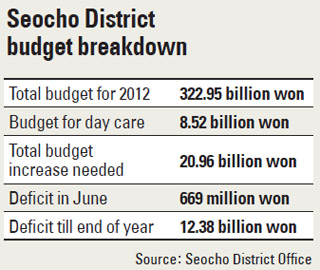 As toddlers in a day care center in Seocho District, southern Seoul, awoke from their afternoon nap yesterday, their teacher sat them down and fed them a snack of boiled potatoes and milk. But as the bumbling toddlers burped and gurgled carefree, the center, parents and the district were in a state of calamity.

Sohn Jae-sun, 59, director of the day care center said, “Once the day care budget is exhausted on [July] 10th, we will not be able to pay wages to the day care teachers or afford children’s snacks and other costs.”

Still, their waiting list of kids has increased by 50 percent since last year.

Less than four months after the controversial free day care policy for toddlers less than 24 months old was implemented, Seocho District is the first of the local governments to declare that its budget will be exhausted within a week.

The Seocho District Office stated yesterday, “The budget for the free day care program procured for this year will be exhausted by July 10. If there is no support from national or city funds, the program will be halted.”

Parents said that since the service was free, they might as well take advantage of the system. Hence, the district’s coffers for free day care were drained.

The district will have a deficit of 12.4 billion won this year, and national and city governments won’t be able to provide the respective 10 percent and 27 percent of the funds they were supposed to provide.

Yoo Hye-jeong, a 30-year-old working mom, said, “The government said it will review the free day care program, but why are they so wishy-washy? Was the budget so small that it would be drained in less than a year? If that was the case, they should have expanded the program little by little over a long period of time.”

Another mother, Lee Jeong-min, 33, said, “Once the day care support is cut off, I worry because my family might need to reanalyze our household budget.”

Other Seoul districts are likely to follow suit, with neighboring Songpa District expecting to run out of money for the program come August as well as Gangnam District in September.

As the free day care policy was passed last December in the National Assembly and implemented this March, local governments throughout the nation have balked about the program, citing budgetary constraints.

“With the same system as now, the government has to provide day care for the children and grandchildren of chaebol families as well, and this is not befitting of a fair society,” Vice Finance Minister Kim Dong-yeon said Tuesday. “Decreasing the day care funds for the grandchildren of chaebol and providing more child care benefits to the other social classes is more befitting of social justice,” he said, stating it does not make sense to provide child care support for families with incomes in the top 20 percentile.