British principal joins the UBC in ‘Romeo and Juliet’

British principal joins the UBC in ‘Romeo and Juliet’ 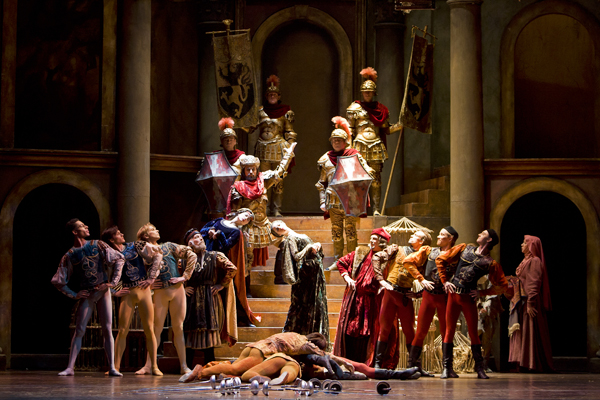 The Universal Ballet Company will present Kenneth MacMillan’s “Romeo and Juliet” from tomorrow for a week at the Seoul Arts Center in southern Seoul. Provided by the UBC


“Romeo and Juliet” was first adapted into a ballet when Eusebio Luzzi put together a production for the Theatre Samuele in Venice in 1785.Hundreds of versions of the classic have been performed across the world since.

One of the most renowned renditions, known for its adherence to Shakespeare’s vision, makes its way to Seoul this weekend. Famed choreographer Kenneth MacMillan’s “Romeo and Juliet” will be presented by the Universal Ballet Company at the Opera House of the Seoul Arts Center.

According to the UBC, MacMillan’s version was last presented in Korea by the Royal Ballet in 1983. John Cranko’s version was presented by the Stuttgart Ballet twice, in 1994 and 2008.

This is the first time a Korean company will be performing MacMillan’s rendition. Robert Tewsley, a dancer from England who regularly appears as a guest principal all over the world, was invited to take the role of Romeo.

This is not the first time Tewsley has partnered with a Korean ballerina, as he worked with Kang Sue-jin in John Neumeier’s “The Lady of the Camellias,” which won her the prestigious Benois de la Danse prize in 1999.

The Korea JoongAng Daily sat down with Tewsley on Tuesday at the Universal Arts Center in eastern Seoul. The following are excerpts from the interview:


Q. It has been 10 years since you last performed in Korea. How do you feel about coming back in front of this audience with Korean dancers?

A. The last time I was in Korea was with Sue-jin in 2002 when the Stuttgart Ballet presented “The Lady of the Camellias,” and we had a phenomenal partnership. This will be the second time I’ll be partnering with a Korean ballerina and it’s always great to work with a new partner.

MacMillan’s “Romeo and Juliet” is a new ballet for the company, so it’s great for me who’s done it a lot to be able to show how to express it and what the intention of the choreographer is. 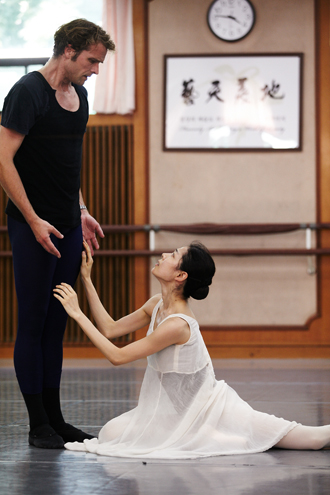 Robert Tewsley, who will be playing Romeo, rehearses with his partner Ahn Ji-eun from the Universal Ballet Company.

You said you have experience with MacMillan’s version of “Romeo and Juliet,” but you also performed a lot of Cranko’s. How are the two different?

Cranko’s “Romeo and Juliet” was the first one that I danced when I was in Toronto, but MacMillan’s version is the one that I grew up with in London, watching it when I was a student.

I think I danced Cranko’s version a lot more than MacMillan’s, but I feel much more affinity to MacMillan’s because I’ve always felt very connected to his choreography and felt close to it. MacMillan’s version is more sophisticated in a way that its constructed and the way people react to it.

It’s very much like real life. If someone is dead or gets killed, what’s happening around it is very real. It’s not staged. It is theatrical but very organic. You have to be on stage exactly how you would be in real life.

MacMillan always wanted to see something real on stage and real reactions. With MacMillan, you have to be a dancer who is prepared to stand on stage and not worry about if you are standing in a nice position. You have to be on stage exactly how you would be if you were living in that situation.

On the other hand, Cranko’s is more youthful. There’s a lot of jumping. Cranko’s version was done first. So I guess MacMillan’s version took everything from Cranko’s and enhanced it just like later productions.


You are now 40. Has age ever affected your performance?

With age, I think you learn how to approach the character more. Of course you may be physically weaker, but you are more experienced. I guess it’s harder for male dancers than female dancers as ballerinas are the ones who are getting lifted around while it’s the men who have to lift them around.

But there are few ballet dancers who continue with their career well over 40. Regardless of your age, we are all in pain. Ballet is a painful job. If you feel that you can still be on stage and still give something and people want to come and see that, then you should continue because that means you still have something to say.