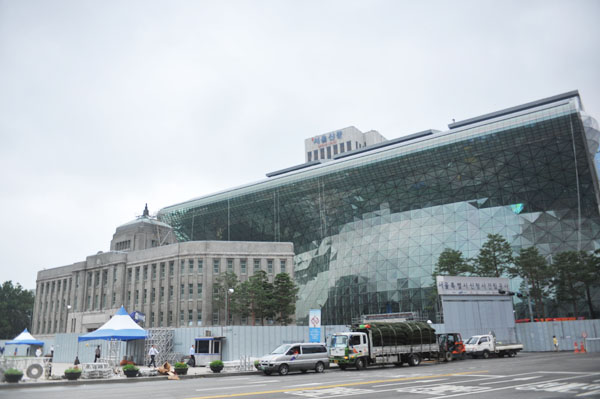 
Local government debt is emerging as a new risk to the nation’s economic soundness amid a series of worrying trends, including oversized household loans.

Although the size of the debt is not as severe as that held by some local governments in Europe, which have seen their credit ratings lowered, some are warning that if local authorities here continue to rely on the central government’s assistance, the situation could deteriorate further.

On Tuesday, Seocho District Office in southern Seoul became the first local ward to announce it will stop offering free day care service to infants due to insufficient funds. Other district offices are expected to follow suit as they face similar financial problems.

The decision was alarming as Seocho is one of the best-financed district offices in the country, creating a sense of panic that its case marks just the tip of the iceberg.

At a meeting with officials from Standard & Poor’s during his visit to Washington in April, Minister of Strategy and Finance Bahk Jae-wan reportedly requested that Korea’s strong economic fundamentals and the easing tensions with North Korea be reflected in any appraisal of the nation’s credit rating. However, S&P is believed to have drawn attention to the deteriorating fiscal soundness of local governments and expressed concern about this. 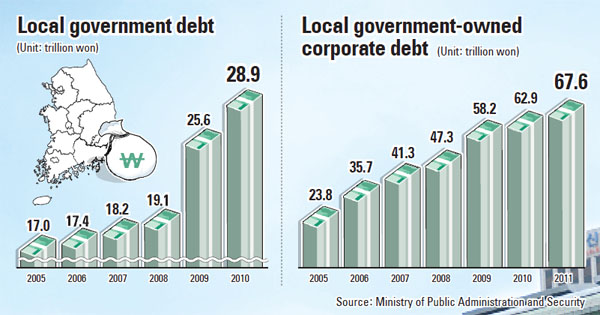 Compared to the overall level of household debt, which now exceeds 900 trillion won ($792.5 billion), the amount of money borrowed by local government offices, including the companies under their wings, stands at around one-tenth. But if these debts were to sour, it would pose a serious threat to the nation’s overall fiscal soundness.

Since the last worldwide recession, sparked by the bankruptcy of Lehman Brothers, the debt held by Korean local government has risen at an exceptional rate. It stood at 17.5 trillion won at the end of 2005 and grew to 28.9 trillion won by the end of 2010, the latest period for which data is available. This represents a 65 percent jump in just five years.

Of even more concern is the snowballing debt that the 55 companies owned by these local government have in their pockets. Their combined debt tripled between 2005 and 2011 to 67.6 trillion won.

And the mushrooming level of debt and is not the only red flag that has been raised.

The soundness of the local governments is also at risk. Some 152 are now suffering from a fiscal deficit, while 24 out of the 55 companies are having difficulties paying the interest on their debt.


How it came about

The piling debts resulted from stimulus packages that were quickly adopted in the wake of the 2008-9 global crisis.

Until 2008, the debt grew at a pace of roughly 1 trillion won a year. However, after the global crisis, the local government aggressively expanded infrastructure construction projects, known as social overhead capital (SOC).

Local government spending on SOC projects grew from 15.2 trillion won in 2002 to 38.8 trillion won in 2009, with an annual growth rate of 14.3 percent. This was partly because they started to build huge edifices as they were busy preparing for major events, including expos and athletics competitions.

Incheon government is now on the verge of bankruptcy after it excessively invested in construction projects for the Asian Games, which the city will host in 2014.

Three years ago, it printed 838.6 billion won in local government bonds to finance various projects, including construction of the main stadium for the Asian Games. The stadium was estimated to cost 185 billion won.

It also needed 78 billion won to build a second subway line. However, due to its excessive debt, the city is expected to have to pay between 400 billion and 500 billion won a year from 2015 to 2030, including interest on the principal.

Incheon Mayor Song Young-gil said at a press conference in May that if the debt situation continues to snowball, the city might have to give up its plan to host the games.

The local government in Busan is also suffering as a result of its borrowing frenzy to finance major construction projects, including the rail that connects the city with nearby Gimhae, as well as new tunnel and bridge projects. Some 40 percent of its budget is now likely to be allocated to debt repayments, reports claim.

Making matters worse is the nation’s frozen real estate market and a slowdown in corporate investment, not to mention the reckless way in which many government-owned companies are run. Moreover, more local governments have started to struggle to collect taxes on real-estate transactions and business activities lately.

Development companies are setting off alarm bells due to their high levels of indebtedness.

Many experts point to reckless mismanagement as the primary cause of the piling-up debts. Instead of relying on seasoned professionals brought in from outside, 75 percent of the CEOs at these companies are retired public servants that formerly worked at their respective local governments.

Meanwhile, the fiscal independence of local governments stands at just 51.9 percent, with the rest subsidized by the central government.

As such, if the debts they hold sour, it would not only jeopardize their financial straits but also affect the fiscal soundness of the central government.

“The exceptional growth of local government debt, and the deteriorating soundness of these debts, could increase the burden on the central government. As a result, it could affect the entire country,” said Park Yong-kyu, a researcher at Samsung Economic Research Institute. “The way that local government offices and companies are managed needs to be urgently restructured. They also need to find new profit models and improve local tax structures to prevent the situation from getting out of control.”