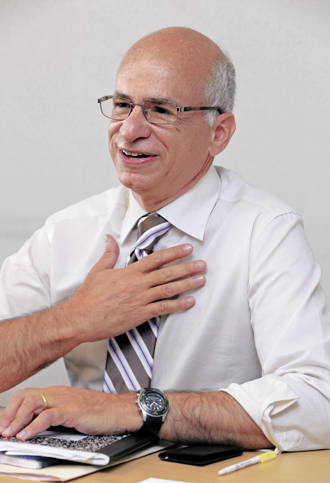 President Lee Myung-bak awarded the Civil Merit Medal to an American philanthropist at the Blue House yesterday for his efforts to help single mothers in Korea.

Dr. Richard Boas, 63, a former ophthalmologist, was recognized for his contribution to the improvement of public perceptions of single mothers and his role in promoting access to parental resources.

“I’m deeply honored to receive this prize from the president of South Korea, but I don’t see this as recognition of my solo work, but of everybody’s efforts in the organization in promoting the cause,” Boas told the JoongAng Daily after the medal ceremony yesterday.

As a founder of the Korean Unwed Mothers Support Network, which was established in 2007 under the slogan “All mothers have the right to raise their own children,” Boas has been a vocal advocate for the rights of single pregnant women, and single mothers and their children.

The 63-year-old philanthropist, who lives in Vermont, has funded the unwed mother network and other organizations for single mothers with 700 million won ($615,000) of his own money.

He has focused on encouraging single mothers to raise their children themselves by creating an environment in which they have the opportunity to improve their social and economic status.

Boas has an adopted daughter from Korea. He decided to adopt at a time when Korea was sending more than 8,000 children a year abroad for adoption, according to the unwed mothers network.

As an advocate for international adoptions, Boas had helped other American families receive babies from Korea. After a trip to Korea in 2006, however, his perspective on adoption changed following encounters with single pregnant women.

“I met unwed pregnant women who decided to say goodbye to their soon-to-be born children even before they were born,” he said. “That affected me deeply.”

“The meeting hardened my resolve to do what I could do as a foreigner, but also as a loving father of my adopted daughter, to give those unwed women a good opportunity to bring up their children as every woman is entitled to,” said Boas.

“Now the Korean Unwed Mothers Support Network is in the hands of very capable Korean people, and it has been my honor and pleasure to have founded the group and been involved in its business.

“I will always take interest in the issue and cheer for its success,” Boas said.