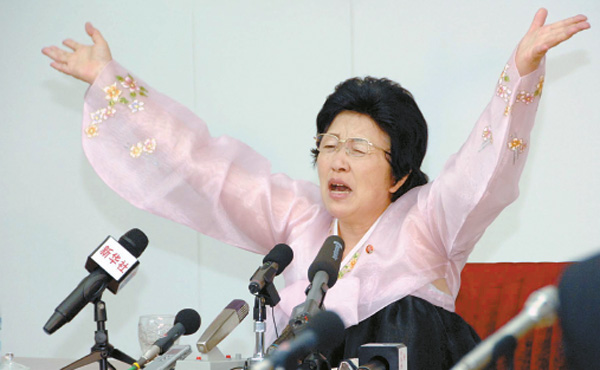 Pak Jong-suk, a double defector, speaks at a press conference in North Korea on June 28 during which she admitted to defecting to the South and lambasted the capitalist system she experienced. Pak said she defected to see her father, who lived in the South, and called her decision “foolish.” [YONHAP]


North Korean state media broadcast an unusual press conference on June 29. An elderly woman dressed in hanbok, or traditional attire, addressed more than 30 journalists, shouting and wailing her arms as she confessed to defecting to the South.

Pak Jong-suk was one of some 24,000 North Koreans to have fled the impoverished communist state to settle in South Korea, but after struggling to assimilate into society and adjust to the capitalist way of life, she took the rare measure of returning to the North.

“In the South, I did humble work, cleaning dirty toilets, washing dishes, serving the elderly - which Southern people never do,” Park said, taking out a handkerchief to dab her eyes. “I didn’t have any specific jobs, doing only volunteer work or manual labor, paid with lower salaries.

“I hope many defectors return to the state security department,” she said. “Dear Leader Kim Jong-un hasn’t blamed me for my unforgivable sin at all, and even allowed me to live with my son and daughter-in-law in Pyongyang. My son is now able to continue teaching at the college [where he used to work].”

Pak’s son and daughter-in-law attended the press conference and posed for photos after her speech.

The elderly woman said she defected to the South to meet her father, who was separated from his family after the Korean War. But the reunion did not turn out as Pak had imagined.

“On March 29, 2006, I secretly crossed the Tumen River and defected to China,” Pak said at the press meeting. “It was a foolish idea to meet with my father in the South and ask him for money.”

According to Park Sang-hak, a North Korean defector and the president of a civic activist group for North Korean human rights who lived in the same complex as Pak, her father was fatally ill when they met in 2006.

“When she finally succeeded in arriving in the South via China, her 90-year-old father was dying, lying on a death bed at a hospital, connected to a breathing tube,” Park said. “Her father died only several days after she reunited with him at the hospital without leaving a will.”

Park Soo-jin, deputy spokeswoman of the Ministry of Unification in the South, told reporters that they confirmed Pak had come to the South in June 2006 and lived in Songpa District, eastern Seoul.

“She came to the South alone without bringing any family,” Park, vice spokesman of the Unification Ministry, told the Korea JoongAng Daily. “We are figuring out her family relations and why and how she returned to the North.”

The Unification Ministry said that when Pak stayed in Seoul, she had a different name and age: Park In-sook, 70. At the press meeting in North Korea, she said she was 65 years old.

Only once before has North Korea held an official press conference spotlighting a double defector.

In 2000, when Yu Tae-jun returned to the North, the regime held a press event to emphasize his struggles in the South and the benevolence of the late Kim Jong-il.

This time, the press conference again focused on the hardships in the capitalist South and encouraged other defectors to follow Pak’s path.

Defectors who were close friends of Pak told the Korea JoongAng Daily that it’s true she had a hard life here in the South, but saw the press conference as an overexaggeration that sought to influence the increasing number of defectors.

“When she was in the South, Pak participated in several rallies with me, denouncing North Korea’s human rights abuses and China’s repatriation of defectors,” said Park of the human rights group.

“I think she must have been forced to speak under the pressure of North Korean authorities as part of their propaganda to prevent further defections.”

Park said that he knew her well living in the same residential apartment complex in Geoyeo-dong, eastern Seoul. He said that it’s true that she had a father in the South as well as half-brothers.

“Her father, who lived in Chongjin, in the northeast of the country, fled to the South only with his eldest son during the Korean War,” he said. “Here, her father ran his own business and raised a fortune.”

Park said that she had an only son and raised him without her husband, who died in 1990s. She suffered in the North and failed to defect several times. She was reportedly repatriated from China and was tortured.

She reportedly had two half-brothers born from a different mother in the South, Park said, but they didn’t regard her as family. Her elder brother who was separated in the South after the war had reportedly moved to the United States.

“One of the half-brothers was a former three-term lawmaker of the ruling Saenuri Party,” Park said. “But she got little help from them. She was lonely in the South, doing temporary jobs for a living.”

A female defector who was a close friend of Pak said that she got tied up in an investment scam.

“She lost lots of money in a so-called pyramid marketing scam, which lures victims to invest a certain amount of money in a specific item in return for receiving high interest monthly,” the defector said on the condition of anonymity.

“As she was too old to do hard manual labor, she just made her living mostly by receiving government subsidies and living in a rental apartment provided from the government.”

In addition to the loneliness and financial difficulties, some defectors said the hardest part for Pak was leaving behind her son.

“She said she would live in a goshiwon [one-room apartment for students] and sold her apartment,” Park, the neighbor, said. “She told us that she would visit China and stay there for several days.

“Her son, a ruling Workers’ Party secretary, wanted to become an artist and entered a music college in Pyongyang and became a faculty member,” he added. “However, after North Korean authorities found his mother had defected to the South, he and his wife were expelled from Pyongyang.”

“I heard that she received a letter from her son saying he is suffering from a terminal illness and was in need of South Korean medicine. It could have been a trick by the regime’s security agency, but she returned to North Korea out of her love for her son.”

A friend of Pak, also a defector, said she had agonized over whether to go back to the country after she was told that her son was ill.

“Since last year, she had said she wanted to be back in the country, crying when she read letters from her son,” the defector said.

“In letters from her son, he appealed to her to come back to the country, saying, ‘If you return, everything will be back to normal.’ The son’s wife, whose family is in a high-ranking position in the regime, also persuaded Park to do return.”

Lee Ae-ran, a professor at Kyung-in Women’s College and the first female North Korean defector to earn a doctorate in South Korea, said that Pak was threatened.

“A relative of Park told me that North Korean security threatened to kill her son unless she returned to the regime,” Lee said.

Pak’s friend said that while it seems on the outside that everything is back to normal in the North, the double defector will have a difficult time living in the regime.

“It seems that everything gets back to normal for her because she’s allowed to live with her family again in Pyongyang in a residential apartment provided by the regime,” the female defector said.

“However, it won’t be easy to live in the North again. Every single move will be under the supervision of the regime.”

Kim Kwang-in, president of the North Korea Strategy Center and a North Korean defector, also said, “If she happens to say anything positive about the South or complain about the North, she will be persecuted immediately.”