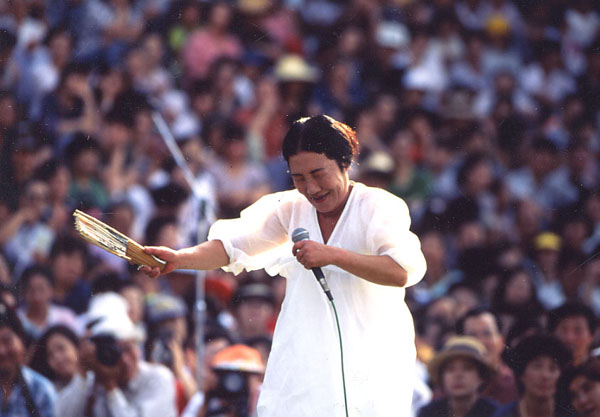 Kong Ok-jin appears in a solo performance of “Simcheongjeon” and “Heungbujeon” in 1996. The legendary folk dancer passed away at the age of 79 yesterday. [JoongAng Ilbo]


Kong Ok-jin, a legendary Korean folk dancer and full-blooded entertainer, died early yesterday at a hospital in her hometown of Yeonggwang, South Jeolla. She was 79.

Born in 1931, she was the daughter of Kong Dae-il, a master of pansori (narrative singing) who taught her the craft along with other masters from a very young age. Kong moved to Japan with her father at about age 10 and trained at the home of famous Korean dancer Choe Sung-hee (1911-67).

It was in 1945 that she joined the Joseon Changgeuk Company, which performs traditional Korean opera. From around that time to the 1960s, she worked for various traditional performing arts companies and developed her own unique style of performance. Among her repertoire were creative one-person songs, dance dramas and her signature “cripple’s dance.”

Though perhaps the most memorable, the “cripple’s dance” is arguably the most controversial of Kong’s works as it imitated the moves of physically challenged people. It could offend some, but was also meant to be humorous and amuse working-class Korean people.

The entertaining one-person songs and dance dramas were also unique for their time, having never been tried or seen before. In them, Kong combined moves from traditional Korean dances with the motions of animals. She based most of her plots on famous traditional Korean folk tales, such as “Simcheong” and “Heungbu.”

In the 1970s, she renounced the performing world for some time, choosing instead a secluded life in Yeonggwang - but toward the end of the decade, the late Jeong Byeong-ho (1927-2011) convinced Kong to leave her farm work and return to the big city and the stage. As an honorary dance professor at ChungAng University and one of the first scholars of Korean traditional dance, Jeong had an eye for some of Korea’s best and most hidden talents.

In 1993, Kong became the first dancer from an Asian country to give a solo performance at the Lincoln Center for the Performing Arts in New York and also won the favor of audiences in Japan, Britain and other countries as the dancer best representing the sentiments of working-class Koreans.

However, despite the international acclaim, Kong’s performances were not recognized as valuable elements of Korea’s cultural heritage for a long time, as some mainstream traditional artists criticized her for not following a conventional style. News reports of how she lived in dire poverty toward the end of her life shocked the country. It was only in May 2010 that the national government decided to designate Kong as an intangible cultural heritage in South Jeolla.

Many in Korea - especially in the performing arts world - are mourning the death of one of the biggest stars among the country’s traditional performers. President Lee Myung-bak sent flowers to the mortuary, and Park Jin-young, a singer and the head of JYP Entertainment, left a tribute on a social media Web site that read: “Kong was the best entertainer I’ve ever seen in my life.”

Kim Hee-tae, a cultural heritage preservationist in South Jeolla, said that efforts will now be undertaken to preserve Kong’s immense impact on the performance world.

“There needs to be efforts to rediscover Kong’s life and career,” Kim said.

Kong is survived by her 63-year-old daughter Kim Eun-hee and granddaughter Kim Hyeong-jin. Perhaps her innate talent as an entertainer and love for the stage will carry on, as her grandniece is Kong Min-ji, a member of popular girl group 2NE1.