Mirae chair tried to flee after allies cut off contact

Mirae chair tried to flee after allies cut off contact 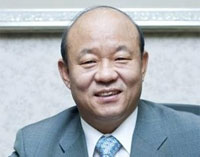 Kim Chan-kyong, chairman of the debt-ridden Mirae Savings Bank, walked around with 35 billion won ($30.7 million) in billion won denominated cash vouchers last September as he got word that his bank would undergo restructuring, a witness told prosecutors in recent testimony.

Kim also decided to stow away to China after being told to cut off contact with Lee Sang-deuk, who is the elder brother of President Lee Myung-bak, and Chun Shin-il, chairman of Sejoong Namo Tour, according to details from the testimony released by prosecutors on Friday.

The Mirae chairman is currently under investigation for financial irregularities at his savings bank and allegedly offered bribes to high-ranking officials such as the elder Lee in exchange for their help in stalling investigations.

“Three months before his stowaway attempt, near the beginning of the year, Chairman Kim turned ghostly white and said former Representative Lee [Sang-deuk] and Chairman Chun sent a message stating to stop contacting them,” the witness was quoted as saying by prosecutors. “It seemed at the time that Chairman Kim got the feeling Mirae Savings Bank could not be saved and decided to siphon off money from the company and smuggle it away.”

“As the savings bank crisis became widespread, Chairman Kim had billions of won of company money in check form and tried to convert that into cash,” the witness said.

Kim was caught trying to flee the country to China after withdrawing 20 billion won from his bank shortly before it was suspended by the government in the beginning of May. Soon after, he was arrested and charged with embezzlement and breach of trust. He embezzled more than 71 billion won, according to prosecutors.

The chairman allegedly got the help of well-connected and influential figures in the financial industry during the conversion process, including Lim Suk, chairman of Solomon Savings Bank.

Investigators have also accused Kim of giving Lim bribes of 1.4 billion won in cash, six gold bars, each weighing one kilogram (2.2 pounds) and worth 360 million won, and two paintings worth hundreds of millions of won in an effort to stop the Financial Supervisory Service’s inspection of Mirae Savings Bank.

Kim also gave Lee “three big ones [3 billion won] in the guise of ‘insurance’ ” against investigations ahead of the presidential election in 2007, according to the witness.

The president’s brother was questioned by prosecutors last week on suspicions of receiving large sums from Kim in return for his influence in protecting the failing savings banks.

“When Lee, the elder brother of the president, was a lawmaker, I gave money to him to fund his political activities,” Kim was quoted by the prosecution as saying last month.