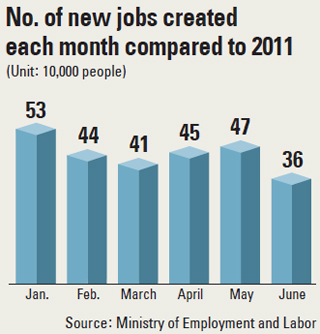 The labor market has started to dwindle in tandem with the economy, and the situation is expected to worsen in the latter half of the year as the fiscal debt crisis in the euro zone shows no sign of improving.

According to Statistics Korea yesterday, the number of newly employed Koreans last month grew by 365,000 on-year, the lowest level in nine months in annualized terms.

On-year growth in employment has been hovering around 400,000 new positions a month for the first five months of this year, starting with 536,000 created in January.

June saw a fall as unemployment rose among people in their 20s and 30s, the Ministry of Strategy and Finance said.

Finance Minister Bahk Jae-wan gave a negative projection about the job market for the rest of the year.

“Growth in employment will slow down further in the second half of this year, and the growth seen last month is smaller than in the same month last year due to the base effect of the job market faring well this time last year,” he said at a crisis management meeting yesterday. In June last year, job growth hit an 11-month high of 472,000.

However, the minister stressed that total job growth in the first half stood at its highest rate since 2004.

“It is hard to believe that nearly 400,000 new jobs are added every month at a time when the economy is growing by just 2 to 3 percent.

“The on-year job growth figure is expected to hover around 300,000 for a while,” said Sohn Min-joong, a senior researcher at Samsung Economic Research Institute. Meanwhile, more people in their 50s and 60s were able to find jobs in the past month than any other age bracket. The number of self-employed Koreans also increased to 5.83 million in June, marking a 3 percent on-year increase for the 11th straight month, the agency said.

Many were so-called baby boomers, born between 1955 and 1963 after the end of the 1950-53 Korean War, who retired earlier than planned and subsequently opened small start-ups, restaurants or retail outlets.

“The expansion of the self-employed sector could [have a negative side effect] as a growing number of self-employed businessmen could mean more household loans, which won’t help curb the nation’s debt problems,” said Sohn.

According to a report by HSBC summarized and released by the Korea Center for International Finance yesterday, the government will soon need a supplementary budget as the labor market starts to suffer from the slowdown in economic growth.

The report by the U.K.-based investment bank said Korea’s job market is likely to be hit by the government’s early execution of its budget in the first half, as well as downturns in the manufacturing and construction industries.

“If Korea’s gross domestic product growth in the second quarter turns out to be lower than estimated, there is a possibility the Korean government would earmark a supplementary budget in July,” the report said.