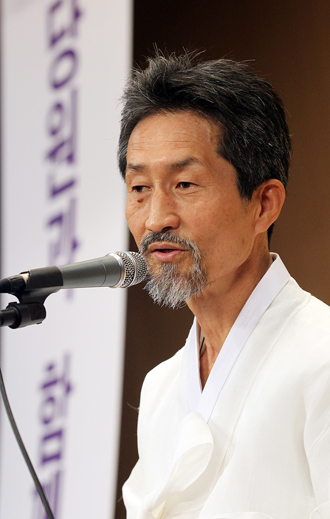 The minor opposition Unified Progressive Party elected reformist Kang Ki-kab as its new leader yesterday, signaling that the left-wing political group is revamping its image after months of infighting and controversy.

“The UPP won’t stop making bold reforms,” Kang said in a statement released yesterday. “We will end the factional activities that distort the sacrifice of members and control the whole party.”

“I will realize the unification and consolidation of party members, wrapping up all of the conflicts and turmoil within the party. Strictly keeping the original spirit of the party’s identity, we will change into liberals embracing and communicating with the people.” 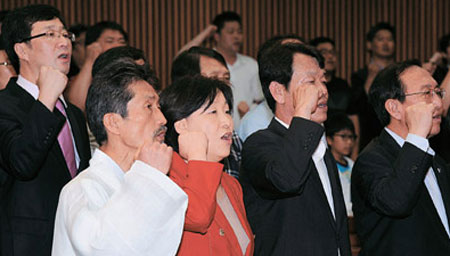 The country’s third-largest party with 14 parliamentary seats has been embroiled in controversy surrounding a rigged primary and members’ ties to North Korea’s juche, or self-reliance, philosophy. Two lawmakers - Lee Seok-gi and Kim Jae-yeon - have been under heavy pressure to resign.

As a party member outside of the UPP’s hard-line faction, Kang has repeatedly asked Kim and Lee to step down. The two are the only lawmakers elected in the primary who have not stepped down or been expelled.

Expectations are high that Kang will convene a party conference as early as today and make a final decision on kicking out the two defiant members. The party’s disciplinary committee has already ruled to expel Kim and Lee through the first and second internal trials.

Questions also remain as to whether Kang will restore the stalled relations with the main opposition Democratic United Party, which is keeping distance from the UPP’s political scandal and pro-Pyongyang image ahead of the December presidential election. The two opposition parties formed an alliance leading up to the April legislative election.

Political observers say that if the internal strife of the UPP continues, it would be hard to restore relations with the DUP.

The pro-North image of the UPP is also a factor that makes the DUP reluctant to form an alliance with the UPP in the upcoming election. The UPP’s largest faction, the so-called Gyeonggi Dongbu Alliance, comprises far-left student activists in the 1970s and 1980s who support the removal of U.S. troops in Korea and are against the chaebol economy.

Lee and Kim, core members of the faction, have made controversial comments such as openly admitting to violating the National Security Law and stating that the problem is “not pro-North, but pro-U.S.” Lee also refused to sing the current version of the national anthem.

The UPP’s approval rating has dropped dramatically to about 5 percent, seeing condemnation rise after the violent scuffle among members during the Central Steering Committee meeting on May 12.

Welcoming the reformist leader, the DUP’s spokesman Park Yong-jin encouraged Kang to show a new UPP to the public.

“We congratulate Kang on his victory,” Park said. “We expect the new leader to show politics that meets the demands of the people and continuous self-reforms.”

The party also elected five supreme councilors: Cheon Ho-seon, Lee Hye-seon, Yu Seon-hui, Lee Jung-mi and Min Byeong-ryeol. Three of them are from the main faction. Sim Sang-jeong, a geographic lawmaker in Goyang, Gyeonggi, was elected as the party’s floor leader on Tuesday.