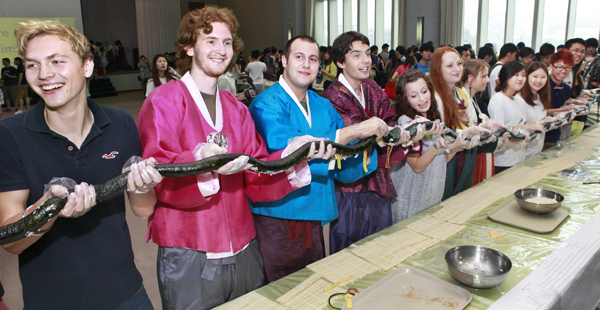 Foreign students hold a gimbap (seaweed rice roll) they made at Sungkyunkwan University in Seoul Wednesday. More than 750 students from 35 countries are taking part in the school’s four-week International Summer Semester. By Park Sang-moon


Using a Samsung Galaxy smartphone to take pictures with her friends while eating a gimbap (seaweed rice roll), Sarah Mrabet clearly enjoyed her time at Sungkyunkwan University campus in Seoul.

“I came all the way from Morocco to Korea because I have been addicted to Korean dramas, especially the ones scripted by writer Kim Su-hyun,” said Mrabet, who combined a hanbok (traditional attire) with a traditional Muslim hijab covering the top of her head. Sarah was one of 756 international students enjoying Korean cuisine such as gimbap and pajeon, or Korean scallion pancakes, at a Korean culture event held by the university Wednesday.

At the event, foreigners from a range of nations dressed in hanbok tried rolling a 10-meter (32-foot) gimbap and flipping pajeon, assisted by Korean students. The food festival was part of a four-week International Summer Semester hosted by the Seoul-based school. Each year, the school offers classes in English based on a theme chosen by the school. This year’s theme was “Sustainable Global Values: Convergence, Divergence and Collaboration.”

Students from 73 universities in 35 countries participated in the program this year, a five-fold increase from the 161 students who came in 2008, the program’s first year.

“The ongoing global Korean pop-culture craze, called Hallyu, has certainly contributed to the increased number of participants from overseas,” said Won Tae-hee, assistant manager at SKKU. “Opportunities to be lectured by renowned professors, whom the school invites from prestigious schools outside of Korea, have attracted both Korean and non-Korean nationals.”

“It’s fair to say my love for K-pop has brought me here,” said Yeung Yu, a junior from Hong Kong told the Korea JoongAng Daily.

“Korea has this image as a front-runner in the technology industry,” said Djenara Elattar, who studies at the Inseec Business School in Paris. “I wondered how Korea cultivated that image.”

One course offered this summer was “Corporate Leadership in East Asia.”

Korean students enjoyed the program, too. “It’s fun going to class with students from all around the world, not to mention we can practice English,” said Song Mi-ju, a fourth-year economics student.

“I never thought I would take a class by a professor from University of Cambridge with foreign students in the same classroom,” said another student, Lee Su-jeong.

Korea as a whole has seen a big increase in the number of young foreign nationals hoping to study here. Korea University, for instance, hosts a summer class for foreign students. This year, it drew nearly 1,200 foreign students, a sharp increase from 152 in 2004.

“In addition to the Hallyu and enhanced standing of the country, which have contributed to the increased presence of foreign students, it’s also important to note that universities in Korea have long strived to raise their global competitiveness, resulting in their growing global appeal” said Lee Ka-young, an official at the Global PR Corporation at the Education Ministry.