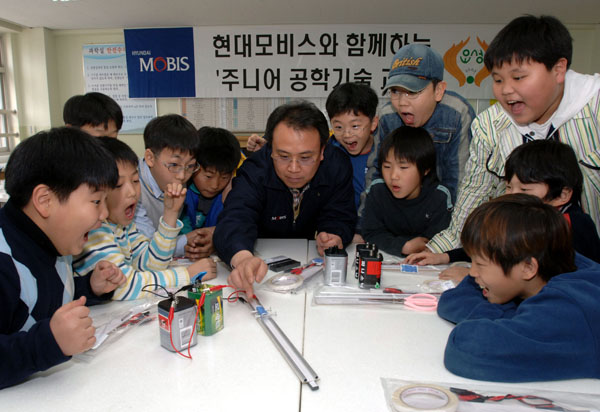 Its Transparent Umbrella Sharing campaign is one of the most illustrated social welfare programs of Hyundai Mobis. It started in 2010 to prevent children from being harmed in car accidents - it has distributed 100,000 transparent umbrellas free of charge to 120 elementary schools in Korea.

The clear umbrella made of see-through material provides better visibility for the children to avoid getting in harm’s way on rainy days.

The umbrella is made of light-weight aluminum and glass fiber reinforced plastic so it is light but solid, minimizing the chance of the umbrella bending or breaking because of strong wind.

The umbrella also reflects light so when it is dark due to rain even in day or at night, the drivers can easily recognize children walking across. On the handle of the umbrella, there is a whistle attached for protection, in case of an emergency.

Children’s traffic safety education center Kids Auto Park is now open. In May 2009, together with the group companies as Hyundai Motor, Kia Motors and the Seoul Metropolitan Government, the company opened the Kids Auto Park in Children’s Grand Park in Seoul Neung-dong, Gwangjin District, eastern Seoul. At this 3,000-square-meter (32,291-square-foot) park there are various educations. It is the largest children’s traffic safety education facility in Korea that can accommodate up to 12,000 children a year.

At the park, children can learn and experience programs showing how to act in hypothetical dangerous situations, how to put on safety belts, how to walk safely on streets and children’s motor driving.

This is to address the commonly occurring trend of early-age aversion toward science and engineering, which has now become a social issue.

The program started with the purpose of raising science talents started in giving the first lecture to elementary students near Gyeonggi Yongin technology institute in 2005, and has expanded widely to areas in Cheonan, Ulsan and Jincheon, where large business areas of Hyundai Mobis are located.

The Junior Engineering School that takes place once a month for fourth to sixth graders is based on fun, interactive experiments so students learn while enjoying the learning process and retaining information.

Besides fulfilling the social needs to the world’s biggest issue, climate change, the company is creating a Hyundai Mobis Forest in Jincheon, together with the National Nature Trust and Jincheon county, North Chungcheong.

The ground breaking ceremony took place in the first half this year and the company will invest 10 billion won ($8.71 million) for 10 years to create a 108-hectare (266-acre) forest “where everyone is happy: near the Chopyeongho also in Jincheon.