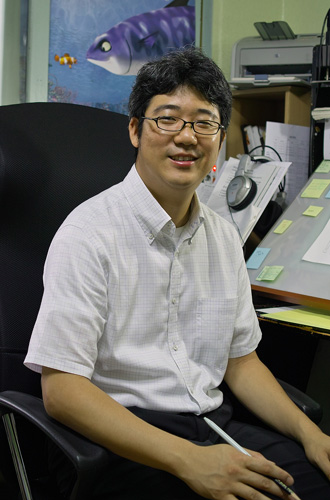 Story ideas can hit you anywhere - at home, in the park or in bed right before falling asleep. For director Lee Dae-hee, his creative juices flowed in a more unexpected place: a sushi restaurant.

The 35-year-old director was reminded of jaded modern life when he encountered a school of fish in a water tank of a Korean seafood restaurant. Now his analogy is manifested in the movie “Padak,” which is set to hit theaters on July 25.

Lee’s debut feature film is a story about a school of fish in a water tank at a sushi restaurant. A series of power struggles and other conflicts occur as some of the fish struggle to get out while others want to stay.

The film has been well received and premiered at the 13th Jeonju International Film Festival and has been invited to this year’s Seoul International Cartoon and Animation Festival.

The Korea JoongAng Daily sat down with Lee Dae-hee to discuss his movie and his invitation to Korea’s film festivals.

Above are stills from the animation film “Padak,” directed by Lee Dae-hee. Lee said the idea for the film hit him when passing by a water tank at a sushi restaurant. Provided by Indie Story

Q. How did you come up with the idea for “Padak”?

A. There was a sushi restaurant on my way home from work. A large water tank full of fish was placed in front of the restaurant. At first, I was sympathetic toward the fish because a school of fish forced to live in a glass tank looked like me struggling at work. The fish might try to get out, but it’s likely to end up in failure. So did I. I could find comfort because I am in a better position than the group of fish. At least I am not destined to be killed by other people. Later, it occurred to me that fish in the restaurant can be main characters to depict human society.

Have you had other experiences with fish?

I worked part time at a seafood restaurant after deciding to work on “Padak.” A heavy load of research is usually required to make an animated film more persuasive. I thought some work experience at the restaurant would give me an opportunity to look into the fishes’ motions and other background information on sushi restaurants. I figured I could earn some money, too. [Laughs]

I learned how to prepare sliced raw fish and it helped me depict a scene where fish is filleted.

Could you describe the different characters in the film?

Different kinds of fish appear to represent various aspects of human beings. A mackerel, the main character, tries to stand up to reality and seeks a solution for a better life. An old flatfish is kind of a foil who wishes to stay in the status quo and wield absolute power in the existing system. Other characters represent a No. 2 man and the naive nature of humans.

Is there any visual effect that you focused on?

I tried hard to present a vivid and realistic depiction of a sushi restaurant. At the same time, to deliver a grim atmosphere of the restaurant, I mostly used a gray tone. I thought it was important to create a dark atmosphere because the fish living in the water tank seemed to me to be no different from a jail.

The main character is a female fish. Is there any particular intention behind this?

I thought a proactive female character could result in a much more dramatic effect. But the movie is not about gender discrimination. It is more about ordinary people whose willingness is frequently restrained by society.

Which age group do you think most relates to the story?

It may be people in their mid 20s to early 30s. After leaving school, they are thrown into a harsh society where things are not going as they wish. They sometimes can’t do what they love for various reasons. I was also in my late 20s when I first came up with the story. Stressed-out teenagers might also identify with the captive fish in the glass tank.

What makes “Padak” unique compared to other animated movies?

The movie deals with conventional themes such as power struggles and change against the old rule. Those themes can be widely understood. But I tried to inject something uniquely Korean into the movie. That’s the dramatic emotions delivered by the characters. Koreans tend to express their feelings more vividly. You will find emotions in the movie more explosive compared to, say, Pixar animation films where the emotional flow is soft. The setting of the movie is also uniquely Korean.

You won awards at two film festivals: the 13th Jeonju International Film Festival and the 16th Seoul International Cartoon and Animation Festival. How did you feel when the awards were announced?

I was pleased, not because I received the awards, but because my work can be presented to more people. If a movie is screened at a festival, the response tends to be more optimistic due to the atmosphere. I was happy because viewers could enjoy my work in this environment.