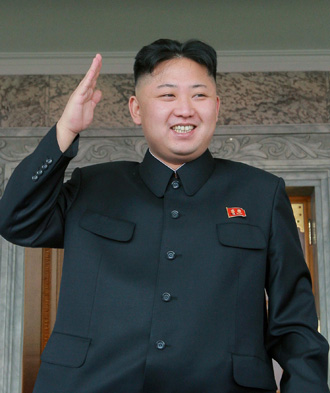 “A decision was made to award the title of marshal to Kim Jong-un, supreme commander of the Korean People’s Army,” the Korean Central News Agency said in a report.

His promotion came in the middle of a surprise military reshuffle reportedly led by the ruling Workers’ Party and Kim.

Ri Yong-ho, the high-profile chief of the general staff of the North Korean army, suddenly lost all his posts on Sunday. Two days later, a little-known four-star general, Hyon Yong-chol, was promoted to vice marshal, raising speculation that he might replace Ri.

The former was given the title in 1992, two years before he died. Kim Jong-il was named grand marshal in February, two months after he died.

Aside from members of the Kim dynasty, three other men have been named marshal in the past. Two of them, former Japanese guerrilla fighters with founder Kim Il Sung, have died. Ri Eul-sol, a 91-year-old former guerilla and bodyguard of Kim Il Sung, is alive.

Kim Jong-un’s promotion is reminiscent of his father’s, according to Kim Min-seok, spokesman of the National Defense Ministry of South Korea.

“The late leader Kim Jong-il was awarded the title ‘supreme commander’ in 1991, and a year after, he was given the rank of ‘marshal,’?” Kim said. “Jong-un was promoted to supreme commander in 2011 and became a marshal within a year.”

Jong-un was made a four-star general in September 2010 during a ruling party conference. Technically, in order to become a marshal, he should have been given the rank of vice marshal first, but he skipped that step.

The regime currently has 21 four-star generals and nine vice marshals, including the newly promoted Hyon.

Analysts said Kim is trying to strengthen his grip on the military with his promotion.

“In such a sensitive situation, when the dismissal of Ri Yong-ho could trigger turmoil in the military, the regime is trying to stabilize Kim’s control over the army,” Cheong Seong-cheang, a senior fellow at the Sejong Institute, said. “The rank of marshal that he was awarded yesterday is a bit different from what the others have been given. Pyongyang called it ‘marshal of the DPRK [the acronym for the full name of North Korea]’ not just of the military, which means he is the top military official controlling the whole nation.”

Kim Yeon-chul, a professor at the Department of Korean Unification of Inje University, said that Jong-un is apparently widening the power of the ruling party and curbing that of the military.

“Under former leader Kim Jong-il, the military was strong because of his Songun or ‘military first’ policy,” Kim said. “Ri Yong-ho played a pivotal role in stabilizing the rule of the young leader during the sensitive succession period, but Kim doesn’t need him any more. Kim wants to boost the local economy, and to do that, he needs to rein in the powerful military first.”

The regime’s priority will not be “military first” but “party first,” he added. “Personnel matters will be dealt with by the two political heavyweights, Kim’s uncle Jang Song-thaek and General Political Bureau Chief Choe Ryong-hae.”