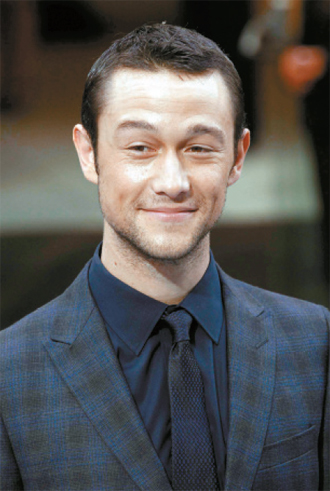 Joseph Gordon-Levitt arrives for the world premiere of the film “Inception” at the Odeon in London in this 2010 photo. The actor, who gained fame on the TV show “3rd Rock From the Sun,” portrays Gotham police officer John Blake in “The Dark Knight Rises,” the eagerly anticipated final installment of director Christopher Nolan’s Batman trilogy. [Reuters/YONHAP]

LOS ANGELES - Joseph Gordon-Levitt has come a long way from his television days playing a disguised extraterrestrial stranded on Earth, harnessing a chameleon-like ability to inhabit a variety of roles in independent films and big-budget blockbusters.

While details about the film plot have been kept closely guarded, the actor told Reuters in a recent interview that fans can expect “a really excellent movie and a real ending” for the trio of Nolan’s movies about the crime-fighting superhero.

“Sometimes they call something a trilogy, and it’s not really a trilogy, it’s another sequel to make money. But this really is a great ending, there’s a beginning, a middle and an end,” Gordon-Levitt said about Nolan’s Batman movies.

Gordon-Levitt plays idealistic rookie cop Blake who becomes Commissioner Gordon’s protege. As trouble is unleashed on Gotham by the villain Bane, Blake becomes a key figure in joining Batman to save the city.

Following “Dark Knight,” fans see Gordon-Levitt in several films over the next few months, including adrenaline-laced thriller “Premium Rush” next month and opposite Bruce Willis in sci-fi time-travel thriller “Looper” in September, which reunited him with “Brick” director Rian Johnson.

“[Rian] wrote the part for me, and I’ve never had somebody write a part for me. That was an honor,” Gordon-Levitt said.

In “Looper,” both Gordon-Levitt and Willis play the same mob hitman called Joe, hired to kill targets through time travel.

Gordon-Levitt took to the challenge of becoming Willis both physically and mentally, watching the “Die Hard” star’s old movies, listening to his voice and spending time with him.

“My favorite part of acting is becoming something other than myself, and most of my favorite actors are the chameleons, the ones who disappear into their roles. You don’t see the actor on screen, you see the character,” Gordon-Levitt said, citing Gary Oldman, Meryl Streep and Daniel Day-Lewis as influences.

Director Johnson told Reuters that Gordon-Levitt put in a lot of “legwork and heavy lifting” to research and embody his characters thoroughly so that audiences don’t feel like he is simply putting up an imitation.

From ‘3rd Rock’ to blockbusters

Gordon-Levitt, 31, a native of Los Angeles, has spent most of his life in front of a camera, appearing on television regularly since the early 1990s and landing a lead role on NBC’s alien comedy “3rd Rock” alongside John Lithgow.

The actor’s transition to movies began with a breakout role in 1999 teen comedy “10 Things I Hate About You.” Since then, he has worked nonstop across a variety of film genres, from 2004’s gritty, low-budget drama “Brick” to playing a hopeless romantic in 2009 romantic comedy “(500) Days of Summer.” He broke into blockbusters with Stephen Sommers’ “G.I. Joe: The Rise Of The Cobra” in 2009, and in Nolan’s “Inception” in 2010.

“The reason he’s been successful at it is that he applies the same criteria to big movies as he does to small movies, he’s not just looking to break in and hop on board the latest big franchise, he chooses stories and filmmakers he’s interested in,” said Johnson, who is close friends with the actor.

Gordon-Levitt’s range is wide. He portrayed a cancer sufferer in last year’s comedy “50/50” and will be a bike messenger in the upcoming “Premium Rush,” as well as Abraham Lincoln’s son opposite Daniel Day-Lewis in Steven Spielberg’s “Lincoln.”

“I have an eclectic taste in the movies that I watch as well as the movies I’m inspired to want to work on. Variety is what keeps things interesting,” the actor said. “I do work a whole lot and that’s what I love to do, I’m very lucky to have a job that I love and that’s pretty much what I do with my time.”

He also is heavily involved with his production company hitRECord, an online community of creative individuals who work on projects, including “The Tiny Book of Tiny Stories,” with Volume 2 due out in November.

“There’s plenty of people who don’t have access to participate in the traditional entertainment industry and are great artists all the same, so hitRECord is a way for me to work with those people,” said the actor.