The ideas of enigmatic Ahn now in book form

The ideas of enigmatic Ahn now in book form 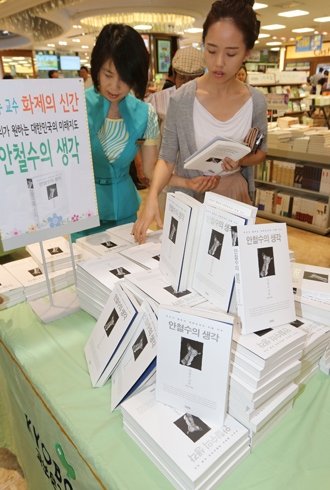 The book “Ahn Cheol-soo’s Thoughts” on sale at Kyobo Bookstore in central Seoul yesterday amidst anticipation that the software mogul-turned-scholar will run in the December presidential election. By Ahn Seong-sik

Taking another step closer to a run for the presidency, liberal independent Ahn Cheol-soo yesterday published a book describing his views on key issues confronting Korea, from reform of the country’s business conglomerates to inter-Korean relations.

The book, titled “Ahn Cheol-soo’s Thoughts,” was published yesterday amidst anticipation that the software mogul-turned-scholar will run in the December presidential election. Although Ahn has not formally declared a bid, he is considered one of the strongest liberal contenders against the ruling Saenuri Party’s front-runner Park Geun-hye.

In the book of conversations with Jae Jeong-im, a journalism professor from Semyung University, Ahn said he was in the final stage of deciding about a presidential bid.

Asked by Jae if he has made up his mind, Ahn asked back, “What should I do?” 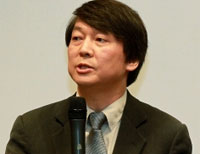 Then he answered himself: “The only thing left to do is make a lonely decision.”

In the book’s preface, Ahn writes that his contemplation about participating in politics was spurred by the liberals’ loss in the April 11 general election.

“Before the general election, not many people doubted a liberal victory,” Ahn writes. “I thought the next step for me, after the opposition won and a liberal presidential candidate established his support, would naturally be going back to where I was. But after the unexpected liberal defeat, I felt political expectations about me were growing, and I had to seriously think about what the people wanted and where their craving came from.”

Ahn writes that he has made career choices in the past after relatively short periods of thought, but participating in politics was not something he could decide alone because it will have a grave impact on the country.

“Whether I will play a role as a responsible politician or as an intellectual who will contribute to changes in our world, I want to use my thoughts in this book as the basis and join hands with more people,” Ahn writes.

Ahn writes that the book is the beginning of his efforts to share his thoughts with the public. “If many people think it is different from their expectations, that will mean I am not qualified,” Ahn writes. “But if many people agree with me, I will go forward.”

While Ahn doesn’t exactly say he will run in the presidential election, he promotes his strengths as a possible candidate, calling his inexperience with conventional politics an asset. He also criticized the practices of established political parties.

“It is fortunate that I don’t have the adverse experiences in politics because we are living in an era to bid farewell to the old system,” Ahn writes. “It can be my strength that I have no experience with business-as-usual politics.”

“I am a believer in party politics,” Ahn writes. “But I advise voters to look at the candidates rather than their party affiliations because the political parties have problems.”

Through the book, Ahn writes about his views on major issues including welfare and conglomerate reform. He also writes, “Korean society’s justice is directly related to economic democratization.”

On inter-Korean relations, he writes that society needs to change its views on unification from treating it as an event to a process. He proposes that inter-Korean economic projects be expanded and suspended tour programs resumed.

The ruling and opposition parties yesterday reacted to Ahn’s book.

“Politics is about reality and realizing things,” said Representative Kim Young-woo, spokesman of the ruling Saenuri Party. “But Ahn is still thinking. It is dubious that Ahn can prove anything before the people as a presidential candidate.”